Taking advantage of TAPS Petaluma's "wings Wednesday" the frau and I stopped by for some of those spicy goodies and chose several beers to pair with them. 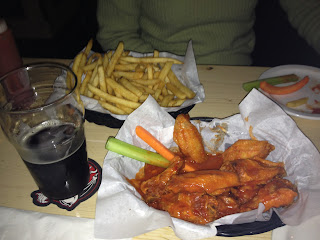 Note: we never order the hottest, Stage 3, since Stage 2 damages enough taste buds.
Great sauce and of course their "salt n peppa" fries make an equally powerful assault... so that's where the beer comes in.

In the photo over there, I'm trying a Ninkasi  Double Red Ale to start. Paired well but the strong caramel character just didn't seem right, even with a good hoppy finish. Good drinker but for another dish.


Kay had the Rogue Roguenbier Rye. Neither of us felt it was the right beer either... the rye aftertaste didn't blend with the spices.


So, what two (pictured below) made the cut, so to speak? Well on the left is the Goose Island IPA (6% ABV) and on the right, Bear Republic's Cafe Racer 15, Dbl IPA (9%).
We both agreed that these two, tho very different styles of IPA were made for spicy food like those wings. Goose Island is typical of East Coast IPAs, i.e., less hoppy aroma and a much more balanced finish. The Racer 15 is another knockout, a hop bomb highly amped up! Very drinkable and has that creamy mouthfeel that Racer 5 impresses me with. The high gravity means going slow and probably only having one, but one was enough to corral those hot and spicy chicken parts!  Try it.


The Brewer's Bible: How to Brew Delicious Beers at Home by Kunath, Bri (Google Affiliate Ad)