Scenes From the Beer Road

Having safely arrived at our new world headquarters, Greenville, SC, time to take a minute or two to pass along some of the pics taken at several breweries I discovered along the way. We were never too far away, 'cept crossing thru New Mexico's desert perhaps. Two big surprises, which I will reveal today:

First surprise was in Fredericksburg, TX, on the way to Austin. Fredericksburg has a big German influence and the beers reflected that: very little hop activity and lots of weizens. Very tasty and refreshing. 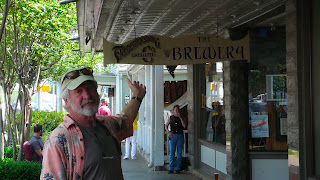 Second big surprise was in Montgomery, AL, where we found Railyard Brewing. Alabama has some strange laws affecting where breweries can operate, this one managed to exist because it's in an historic building, part of a train depot. Beers again were low on hops, in fact there wasn't even an IPA at all. 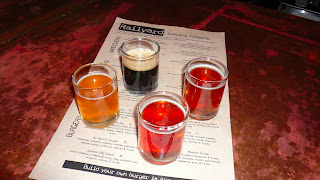 (Note: I'm traveling across country by car with wife and doggies so getting time to update this blog as we go along is problematic. I will be as diligent as I can under these conditions to keep this vital flow of craft beer advocacy and tasting results streaming across computer screens everywhere.)


Visiting Tucson, AZ, so my buddy Jim Broadwell took us to one of the breweries here, Barrio Brewing. I had their IPA, of course, Kay had a Copper Ale, and JB had the Blonde. Perfectly good tasting beers, but I was very disappointed in the pours. Came filled to the rim, no head at all. Now that I am studying for my Cicerone certification I notice these things, sometimes to my dismay. Didn't call it to the attention of our server cause she had already pleaded ignorance about the lager/ale difference and the place was packed. Just thought I would pass this episode along to reinforce the notion that good beer deserves the proper attention. 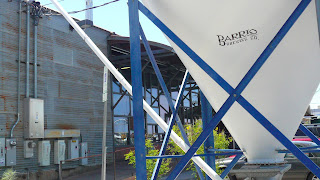 On a recent trip to one of my favorite locales for discovering new brews, the Tap Room located in Whole Foods, Coddingtown, I not only made friends with a new style of beer glass, the IPA glass (see earlier post for details) but even more importantly, I was introduced to Sierra Nevada-Dogfish Head's latest collaborative effort, Rhizing Bines Imperial IPA.

Somewhere around mid pint the thought occurred to me that it would be interesting to find out how such collaborative efforts came about. Who comes up with these new recipes and how? Since I couldn't go to Delaware, home of Dogfish Head, I went to Chico, home of Sierra Nevada, instead.


So, after enjoying a tour and complementary samplings (more about that later) I took my questions to the man who would know, Steve Dresler, Sierra Nevada's Brewmaster.

Joining Steve in his office, I asked him to explain how these collaborations, including Rhizing Bines, come about. His response was classic:

"It's some creative individuals having a couple pints together and asking, what do we want to do for a  beer? You put the concept of contribution [from the individuals] into a conversation and the conversation develops into a liquid...."


The contributors in this case were members from the two family-owned breweries, including Ken Grossman of Sierra Nevada and Sam Calagione of Dogfish Head. I then asked about Rhizing Bines specifically, this being the third joint effort between the two breweries.
Steve told me that since both were known for their hop-forward beers, they wanted a brew that reflected that style of hop handling.

"Rhizing Bines was developed as a tribute to some of the techniques we've developed. They used a constantly hopping device during brewing [DFH IPA is well knows for the 60, 90 and 120 minute versions]. We shipped to them one of our torpedo devices [pic below] for post fermentation hopping along with some proprietary hop varieties."

The end result is a truly drinkable, well-balanced, hop bomb of the nicest kind with what I consider a rather tame ABV (8%) for this intensity. The only problem is that, as a one-off collaboration, when it's gone... that's it. Drink it while you can.

There is more information about the beer at www.dogfish.com/node/47576

Some other sights from my visit:

Steve used an interesting coiled device (the name of which I never got) to tap into the huge fermenters:

Posted by Marv Parker at 1:07 PM No comments: