Last Saturday, August 25, was the date for Zillicoah Brewing's Session Fest, featuring 20 beers and ciders, all under 5.5%. Never made it through all of them but couple were standouts: Faith Healer IPA from Homeplace Brewing; and Glam from New Anthem, Wilmington, NC.

Some photos from the day, which included axe throwing and water tank dumping. Cheers! 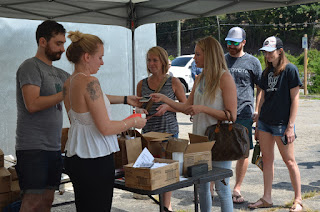 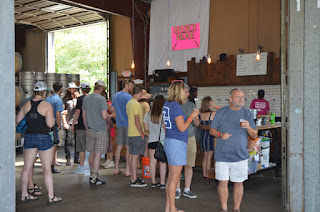 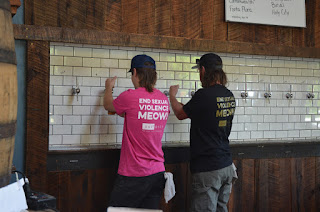 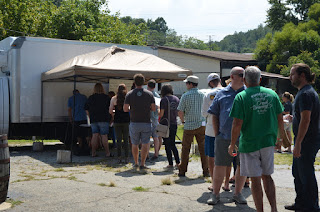 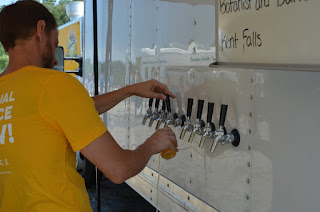 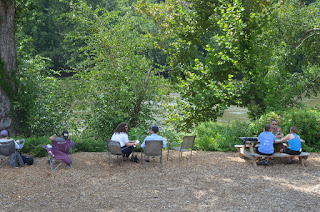 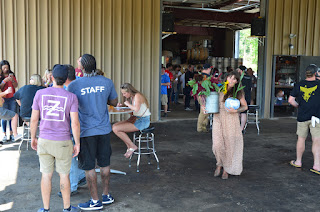 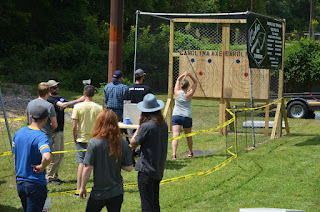 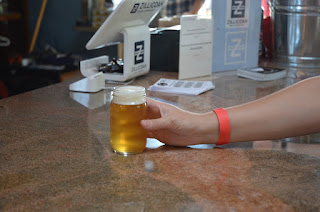 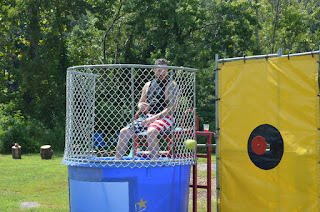 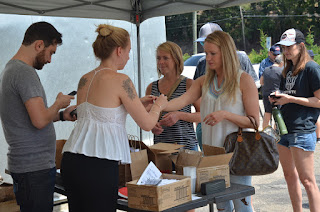 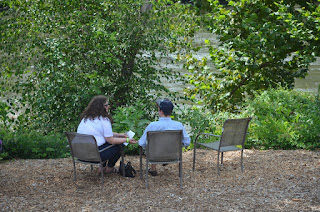 Posted by Marv Parker at 3:06 PM No comments:

So, how was your weekend?
Mine involved numerous new breweries and went very well, thanks for asking. It actually started on Friday when the demands of research required that I attend the official opening of Liability Brewing Co., which I did along with a large percentage of GVille's craft beer loving community. Everyone had a great time trying new beers and no one got their clothes dirty.

Then came Saturday.
Cornelius, NC, is located about 15 minutes north of Charlotte, very near Lake Norman. It also happens to be the home of three breweries all of which were visited for the first time by me and a small crew of the usual suspects.
D9 Brewing Company is well known for several beers, including Hakuna Matata Tropical IPA. But for me it's known as the first sour beer I came to enjoy, Whiskers on Kittens; my first step on the path that led me to appreciate that style. This day I had tasters of Discord, a Sour with Concord Grapes (very tasty), and Brewer's Day Off, a cuke infused Gose, very refreshing on the palate. No one in the group had anything but positive comments about all the beers we tried.

Next stop and just up the road a mile or so, was Ass Clown Brewing Company, one of the principal reasons we made the trip. I've had their beer in cans, usually from Greenville Beer Exchange, but one of our group, Bob Muller had been there before and was so taken with their beers that he intended (and did) propose marriage (and I have the photo to prove it). As the menu board shows, many good choices but I limited my self to four tasters, including the kettle sour Don't Wine, Pucker Up; Negative Image Ale, made with blackberries and peaches; and both IPAs, the Ass Clown and Orange Citrus. The group tasted nearly everything (and using up all the taster glasses) with pleased expressions all around. Oh, Bob never got a response to his proposal, despite buying several 4-packs and a t-shirt, which was just as well, as he proved to be rather fickle, immediately heading for the nearest brewery around.
Which turned out to be Eleven Lakes Brewing, literally a half block down the street. They had been below our radar prior to this but I am glad we found them, all the beers we tried were well made and solid versions of the styles. See the menu board photo below to see the variety. The stand out beers for me (and we tried most, if not all of them) were the Orange Is The New Pale pale ale, the Apricot Habenero Blonde which had a perfect balance of fruit and heat, something that can be very elusive with pepper beers; and of course, Teri's Berry Ale, a raspberry wheat pale named for Teri Lippy, owner/general manager (a very friendly lady who visited our table to answer questions). Ray Hutchinson, Brewmaster, was very busy in the back room preparing a yeast pitch so I didn't have an opportunity to talk with him. If I had I would have congratulated him on his skills and informed him of our group's appreciation for his efforts.

So, that leaves Sunday. Sort of a day off, a hankering for a hamburger for lunch kind of day which I satisfied at the GB&D food truck, just behind the Aviary at Birds Fly South Ale Project. Easily one of the best burgers in town and a perfect pairing with Apologize Less, BFS' a double dry-hopped IPA. Yep, I love my job.
Some photographic proof of our adventures: 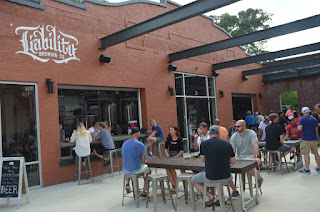 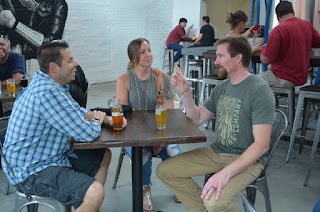 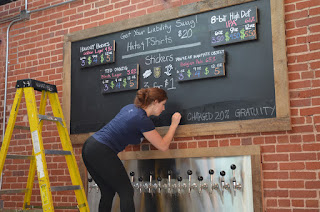 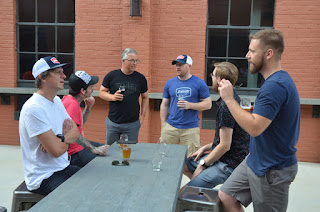 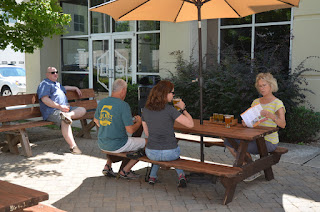 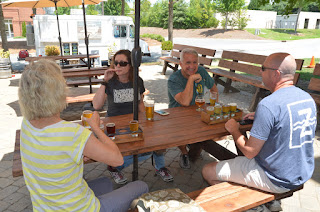 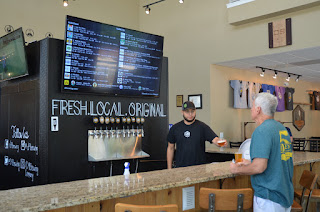 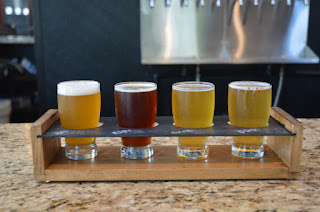 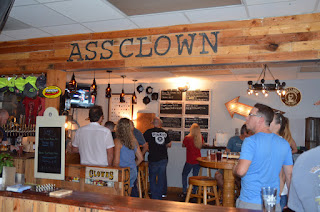 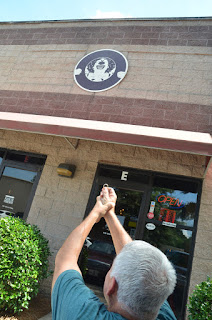 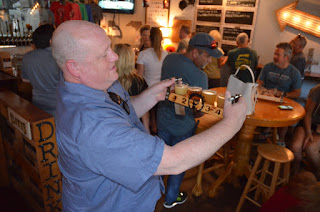 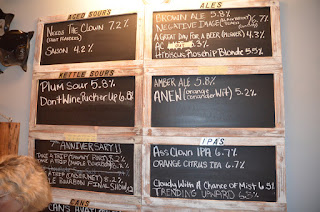 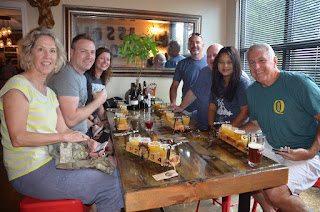 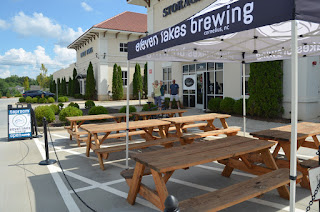 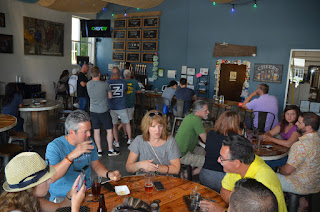 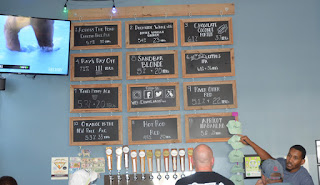 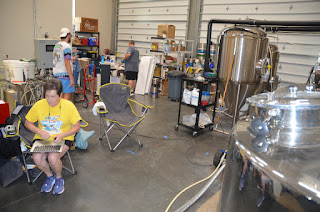