Well, after the suds had settled, so to speak, last night at The Community Tap's Dark Horse Brewing's launch party, hosted by RAFA representative Ashley Bower, I chose my favorite beer for the evening. Not an IPA, surprise, surprise, tho there was one there, but it was this one, Scotty Karate (a name I like saying). Thanks to Ashley for the introduction and for getting this new brew into our market. 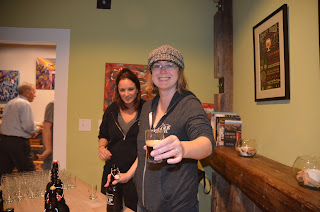 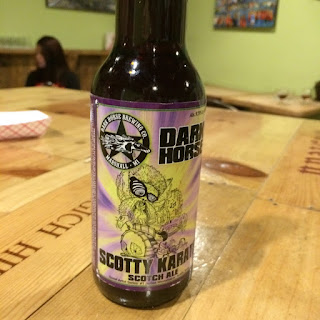 Posted by Marv Parker at 2:40 PM No comments:


Many successful brewmasters today describe their first attempts at brewing as a failure. Such is the case with Shawn Johnson, brewmaster and co-owner with wife, Lindsay, of Greenville's Birds Fly South Ale Project Brewery.


According to Shawn, his first attempt ten years ago, a pale ale made from a kit, was a disaster. But, unfazed he continued and from experience working with Bob Sylvester at St. Somewhere Brewing, in Tarpon Springs, FL, plus his own continued home brewing skills, he has set a course to offer the Upstate (and everyone else eventually) a brewery focusing on Farmhouse Belgian style ales with an emphasis on sours.
All this while maintaining a full-time active service career as an aviation engineer in the US Coast Guard, moving to our area in 2014.


Shawn is enthused about this style of beers, largely the result of his work with St Somewhere, but it appears to be the style that just spoke to him and he's become an evangelist on the subject. He says he wants to produce "pitcher sours," beer that people will want to drink again and again.


Currently he brews at Thomas Creek Brewery while waiting for the appropriate space to become available which will allow him and his wife to finally make their dream of having their own brewery come true upon his retirement from the service. 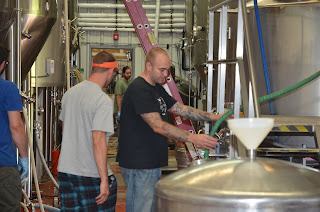 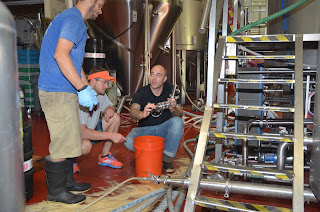 His brews are aged in prepared wooden barrels, usually white or red wine barrels ,  using the solera method, which Wikipedia describes as " a process for aging liquids such as wine, beer, and brandy, by fractional blending in such a way that the finished product is a mixture of ages, with the average age gradually increasing as the process continues." According to Shawn, this means a "continuous supply of sour for blending fresh beers, and more important, local sourced fruits and spices."

Just finishing up after a timely release is a seasonal sour Pumpkin, which might sound unlikely but I enjoyed the taste I had of it, fresh from the fermenter. He also released a session sour-IPA, Yoder which was intended as a one-off but was so successful that he's not ruled out making it again. 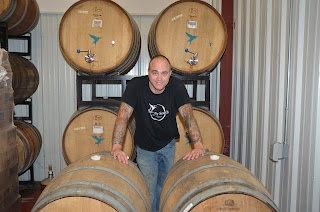 If you'd like to know more or even follow BFS, visit their Facebook page (and learn about his recent trip back to Florida for some collaborative brewing with old and new friends) or to really support sour beer, their Gofundme page will let you do just that.

So, while Shawn is waiting for his ideal brewery site to appear, you can look for his beer at the usual suspects' taprooms. I can personally attest that these beers are worth searching out.

As I previously posted elsewhere, I stopped by Upstate Craft Beer Co., (@UpstateBeerCo) located in the old Clausen Bakery building to see how the construction was progressing. Jack and Chris gave me a quick tour (dodging HVAC supplies all the while) and reiterated their goal of opening before year's end. Some photos of the visit: 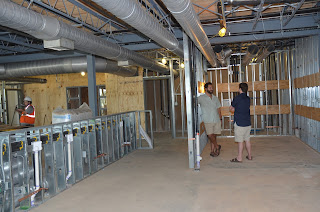 Basically the nano-brewery will have three main areas: seating where beer lovers can sip and enjoy, a small, but tidy kitchen area that will offer light snacks and lunch, and the brewing area which will be kept busy if Chris, Brewmaster, (who recently became a Certified Cicerone) has his way. 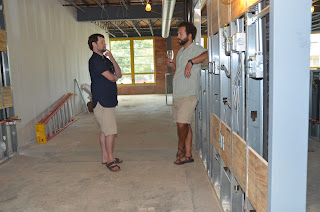 This facility will be a very interesting addition to the craft beer community here and I'm looking forward to the opening. Also anticipating some more Interstellar Pale Ale, a nicely hopped version of the style tha's not overly bitter. 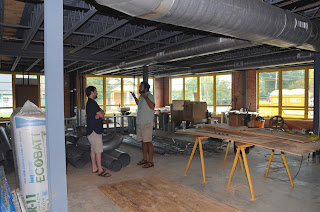 Beer canning became a spectator sport last night at Brewery 85. Watched cans being filled, cans being stacked and cans being tossed! Quittin' Time Helles was the star this time. Cans were also weighed, imprinted with pithy comments and even handed out to a fortunate few ( I got one!). Based upon the huge stacks of empties awaiting their turn, I'd say that chances are good that you could drop in soon for a pint and get the same floor show. Rack'em!! 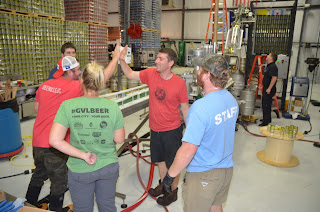 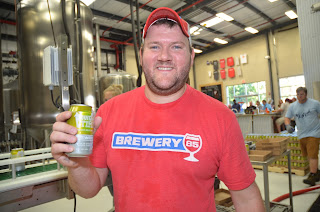 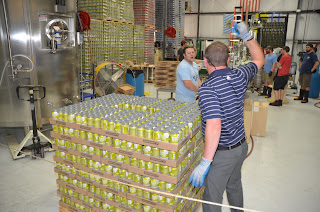 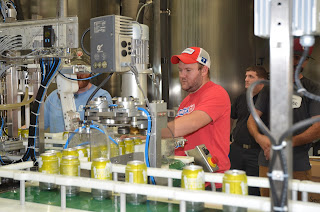 Posted by Marv Parker at 9:14 AM No comments:

Fall for Greenville Fun As Ever 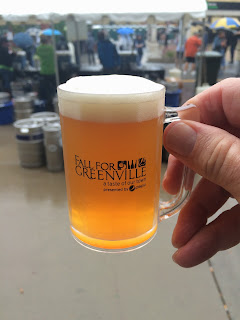 Recovering from a soggy Saturday and a sunny Sunday at Fall for Greenville. As usual, great music and outstanding choices for craft beer. Our locals were well represented with lines forming (on Sunday anyway) at each. Favorite of the event, for me and friends who came with us, turned out to be Foothills' India Pale Lager, although Trifecta by Thomas Creek was a close second. Weird food of the event, tho it tasted good but deadly, was the Fried Oreos. Yep, I tried one. Nope, did not have a second. Used some Holy City's Plough Mud Stout to erase the taste. Congrats to all the organizers, breweries and volunteers who made this year's event as fun as ever. Cheers. 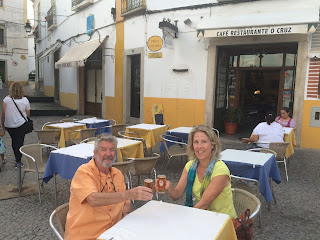 You might have noticed an absence of posts here for the past couple weeks. Got a good
excuse, Kay and I spent 15 days traveling around northern/central Portugal for out first visit there. Of course, lots of beer research was conducted too. And so begins my tale:

Truth be told, the beer scene in Portugal is not all that exciting. Mostly you see either of two beers available, Sagres and Super Bock. Both pale lagers, tho good examples of the style. 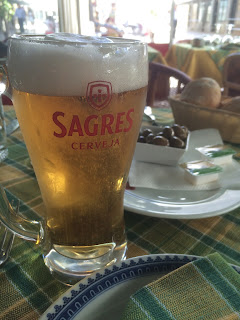 Sagres is brewed in Lisbon by the Sociedade Central de Cervejas e Bebidas, part of the Heineken family, which probably explains why it's everywhere. It's a pale lager which I found rather crisp and refreshing, expecially after walking up and down hills for a couple of hours. 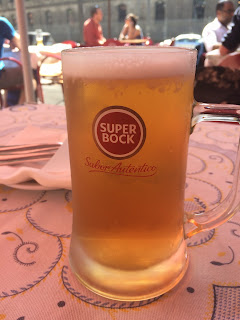 Super Bock is a pilsner style lager, a low abv of 5.6% and also very drinkable. It's part of the Carlsberg family of beers, from Denmark. I probably drank more of this beer than any other, mostly because it was it was usually the one on tap.  I did try the stout version, from a bottle only, on one of our very early excursions in Lisbon, at a cafe near the train station that serves Sintra which is one of the cities we will visit later in our trip. 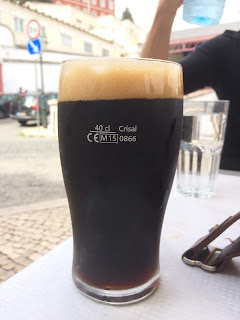 The stout was full-bodied, but a milder version, very little coffee/roasted flavor but enough to make it enjoyable and a most importantly, a change of flavor. 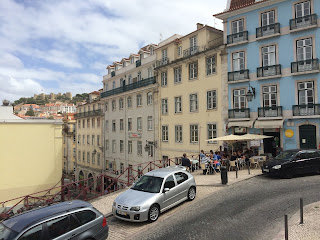 The cafe I mentioned with the Castle in the background on the hill. Not visible are the stairs we had to walk up to find this place. Made the Super Bock Stout that much more enjoyable. 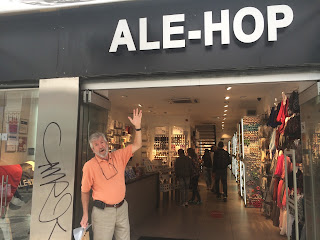 I had a moment of elation when I saw the sign for this shop, but quickly turned sour when I discovered it was only a gift shop and nothing to do with beer. Drat! Clearly a serious example of false advertising.

However, there was good news. I did find two craft (or artesanal as they were called) beers, each with an IPA, Sovina and 8a (Oitavacolina). Tho nowhere near the hop presence I am accustomed to here, they were very good attempts and one of the them, the 8a was quite good, had it twice at the Secret Garden Café in Sintra. 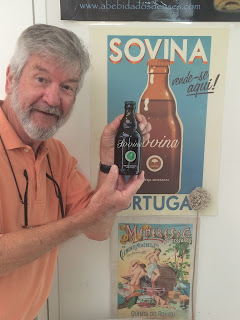 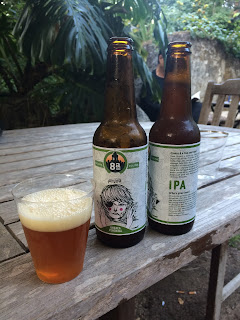 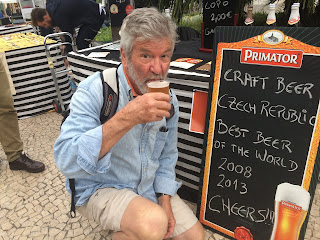 While on a late afternoon walk in Porto, found a small plaza with an outdoor market/event which, surprise, had the world's best beer! Well, that's what the sign said anyway. Had to try it of course. Turns out that Primator is a Czech beer that is just being introduced into Portugal. And if you're a Cicerone you know the importance of Czech pilsners in the history of beer. 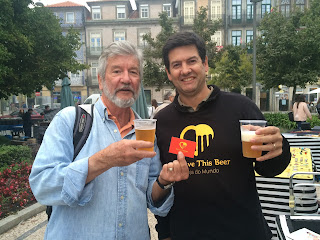 Talked with Rogério Pinho, beer rep, about Portugal's beer interest and the chances of his beer being accepted. Tasting it, I found it to be very typical of the style, well balanced and crisp with dry finish. Enough flavor to make me have it again sometime. Their slogan and the name of their Facebook page is "we love this beer." I hope they are successful in their attempts and wish Rogério the best.

There were many other fun beer-related moments, so here's a photo compilation illustrating that: 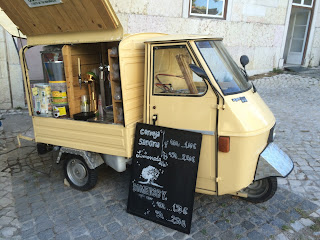 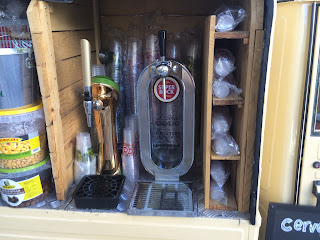 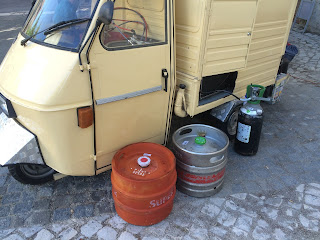 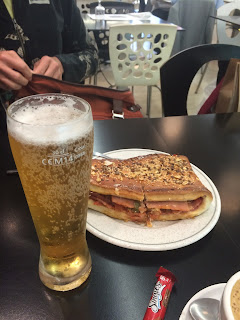 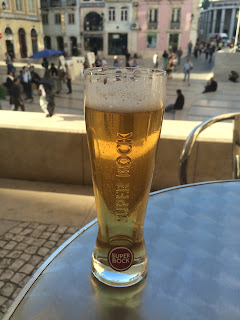 Glad to be back home, where some thoughtful friends had left us some Citra Ass Down, double IPAs (Against the Grain Brewery) in our fridge. As I continue editing all the photos we took (over 1500) I may find more to post here, so check back often. 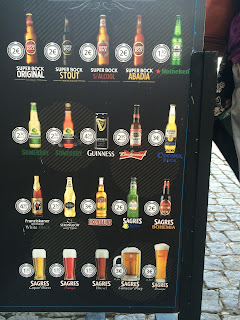