Just returned from a short trip to N. GA, where I discovered that, one, Woodstock has a very inviting pub called the Truck and Tap. Beer lineup included a Creature Comforts Automatic Pale Ale, easily one of the most citrusy Pales I've ever tried. Food truck (hence the name) out back had perfectly tasty food, offering a sausage on a stick which made for a delicious pairing and spill-free eating
.
And, two, for further adventures, the next stop was in Alpharetta, which has 3 breweries I discovered: Jekyll with it's Hop Dang Diggity Southern IPA, Hop Alley featuring a California Coast Style IPA, and 5 Seasons, which I was unable to visit on this trip. (http://www.5seasonsbrewing.com)

GA has 40 breweries (or more) which sort of surprised me but as the trend continues, seems like each good sized town is getting in on the craft beer brewing fun.

Some photos and visual reminders below. 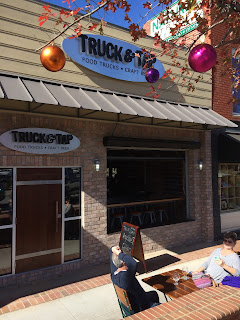 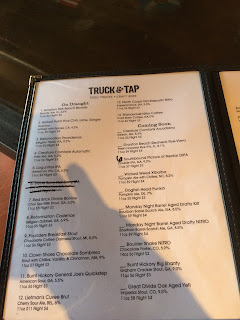 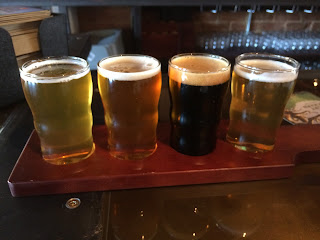 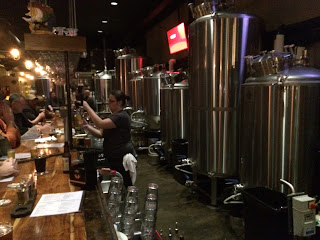 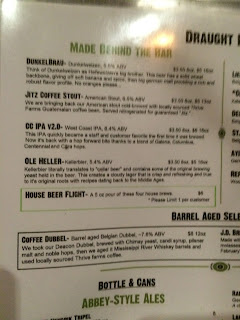 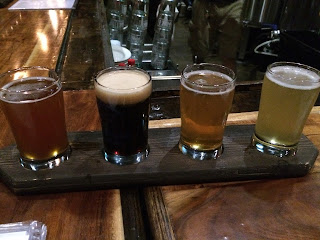 And I didn't even mention Red Hare.... have to make another sweep thru that area soon.

Yep, had an exciting and enlightening day trying new brews, meeting and making new friends in one of the best venues around, Fluor Field, the hometown team's baseball field. Still a lot of editing to do, but here are a few pics to whet your blog-reading appetite: 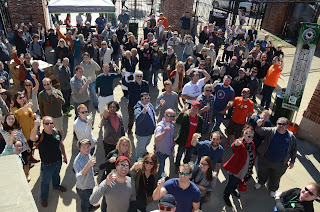 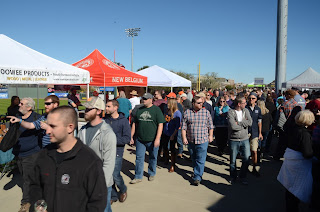 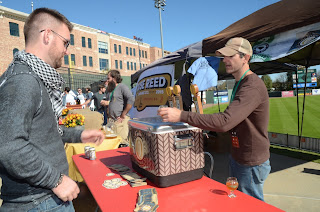 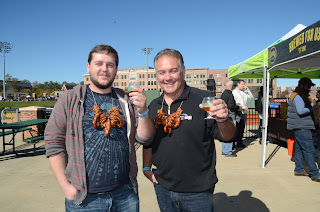 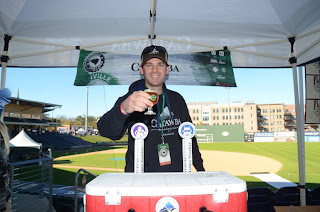 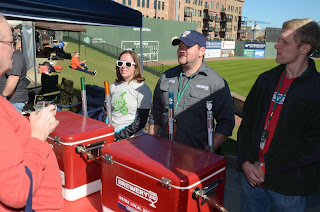 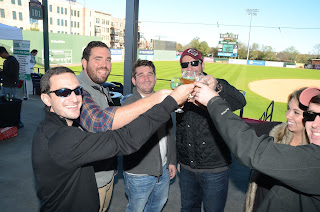 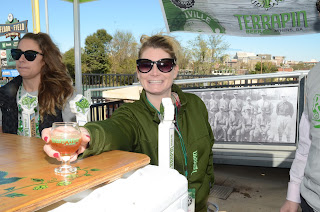 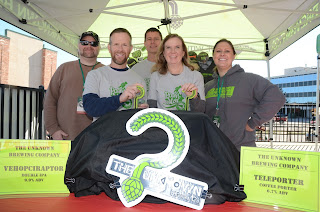 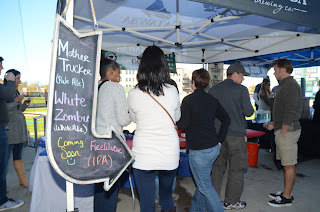 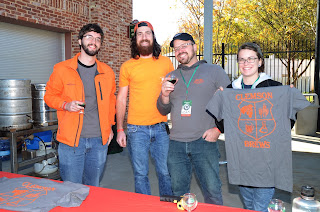 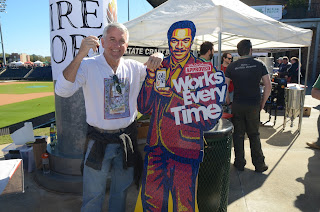 Something for everyone is how I saw it, not just for stout-heads. Hi-Wire's first ever Stout Bout (featuring a blind tasting) certainly pleased hardcore stout drinkers (Narwhal, anyone?) but there was more than enough variety to entice folks to try something new. ABVs ranged from 5.% (Highland's entry) to 12.9% (Sierra Nevada) so it was possible to find one that agreed with your palate and safe driving obligations.

Despite the occasional rain showers, this event was well attended and the impression I got was that most folks there knew their stouts. I know there were some newbies but overheard conversations tended to discuss comparisons with favorites.

I thought this whole concept was inspired (thanks to Marketing Director Abby Dickinson) and really made it a contest. I am partial to any brew with peppers or chiles in it so there were several to try my taste buds. But I also like chocolate and coffee so there was no shortage of any of those. The only one that really tested my tolerance was a sorghum based dry stout. Sorry, but an aftertaste just didn't work for me.

My favorite chile-infused brew was from Asheville's Twin Leaf, their MDXXI (or 1521 in English) which used arbol chiles, a new one for me. Enough heat to make an impression but not overpower and the chocolate-cinnamon combination was well balanced. The finish was lighter bodied than you might expect and I could see myself having a second pint, a criterion of mine when judging.


hiwirebrewingAnd your winners of the Stout Bout 2015 are... 1st Place: @burialbeer | #burialbrewing - Piston Espresso Stout, 2nd Place: @highlandbrewing | #highlandbrewing - Black Mocha Stout w/ Cherries & Oak, 3rd Place: @sierranevada | #sierranevada - Barrel Aged Narwhal, Congratulations!!
One small complaint was the serving temperatures. I and several others were vocal in our opinions that the jockey boxes were chilling the stouts way too much. I understand the viscosity issue, but hopefully next time a method can be found that serves the stouts warmer. As serious stout lovers know (and I don't quite fit that group), as a stout warms, it releases more flavors and adds body. Anyway, just thought I would pass that along.
Some photos and more notes: 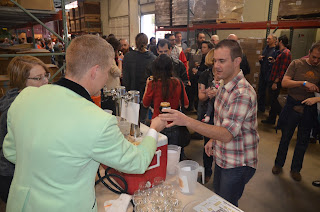 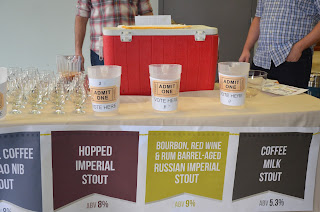 My congratulations to the top winners and mucho thanks to Abby and the folks at Hi-Wire for hosting this very special event. #nextyear 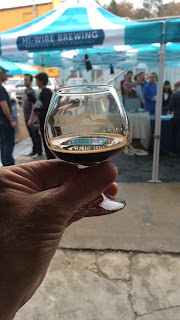 Well, not Atlanta per se, but Sweetwater from Atlanta has bought all the brewing equipment from Pyramid with plans to open a brewery "out west."  I have fond memories of eating/drinking at the Berkeley brewpub. One of the very early ones in the Bay Area.

Posted by Marv Parker at 3:58 PM No comments: 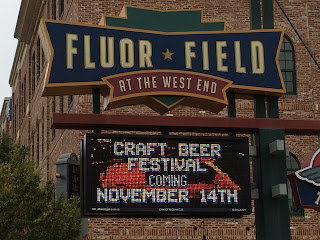 Third Annual Beer Tasting invades Fluor Baseball field. November 14th is the day, and what a day for craft beer lovers! Like the past two, this one will offer some special beers, many cask conditioned versions made especially for this event. Some photos of previous years will help you in your decision to attend: 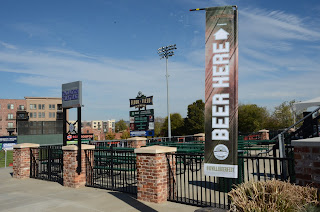 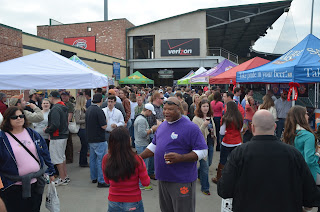 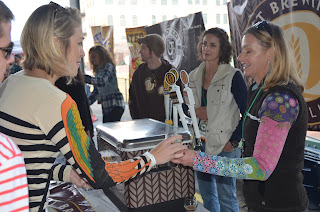 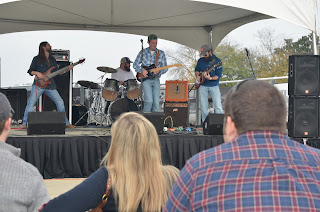 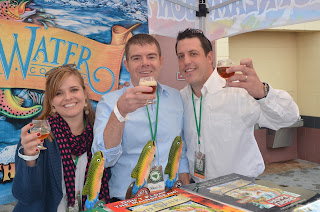 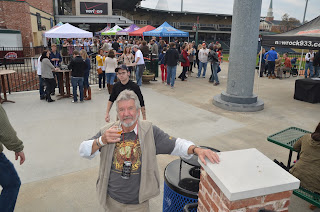 Cheers!!
Posted by Marv Parker at 9:25 AM No comments:

This article is making the rounds, but just in case you missed it, here's another opportunity. Over 12K miles to accomplish that. No mention of how many pints of beer needed.


https://www.washingtonpost.com/news/wonkblog/wp/2015/10/31/the-ultimate-beer-drinking-road-trip-according-to-data-scientists/
Posted by Marv Parker at 11:54 AM No comments: