Its not secret that one of my all-time favorite breweries is Dogfish Head, out of Delaware. Got a t-shirt to prove it: 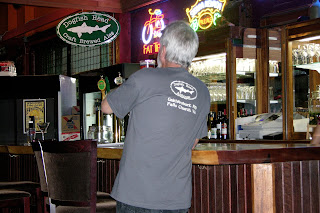 I just read an article about DFH which disclosed some of the brewery's incredible growth over the past year. Very impressive. For example, their IPA portfolio consisting of eight different beers grew at a pace of 25 percent in 2012. Obviously a lot of people other than me really like their hop-centric brews.

So this year they are planning a program called, AHOPECLIPSE NOW!, a series of more than 50 beer dinners built around Dogfish Head’s diverse portfolio of those “hop-centric” beers. Doubt that any are happening here in California, but you never know.

I ran across this video of owner Sam Calagione explaining what all will be happening this new year at the brewery:

Good news for us DFH lovers. And did I mention how much I like their Chicory Stout? It's a seasonal, alas, so it won't be back around until late fall but in the interim I'll have another 60 please...