Just returned from a week-long trip to SC (Greenville mostly) which included a side trip to Asheville, NC, which is only an hour away. Asheville enjoys a special significance in my (and Kay's) craft beer education: we first heard of Dogfish Head 60 minute IPA here at Barley's Taproom and Pizzeria. This time I tried two new ones, French Broad IPA (7% abv), brewed locally and Duck Rabbit Hoppy Bunny (?) Black IPA (7.3% abv) which features eight separate hop additions. Both were outstanding brews and I can heartily recommend them.

Behind the first floor bar at Barleys. There is another one upstairs with more than a dozen taps! 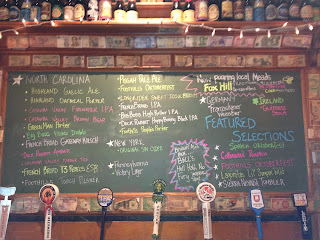 Another find in Asheville was the Wedge Brewery:
Located in the River Arts District, in a somewhat difficult to find location, this small production brewery was a real treat after a long day of playing tourist. Wedge opens at 4 pm weekdays which, according to one local artist located in a gallery upstairs, is good cause otherwise they would never get any work done! Pictured is the Iron Rail IPA (probably named after the railroad tracks adjacent to the property) which is described by the brewmaster thusly:


Back in Greenville, I found this new eating spot, which has some very interesting new beers to try.

Located in the West End district, downstairs from the Mellow Mushroom, this hideaway resto had some very tasty food and even more importantly, two beers on tap from a previously untried brewery, Westbrook Brewing from Mt. Pleasant, SC. I tried the Westbrook IPA (6.8% abv) which was very tasty, tho the hop flavor was more restrained than our West Coast style. Kay tried the Gaffel Kolsch, from Privatbrauerei Gaffel Becker & Co., Germany. It is described as having hefty bitterness in this kolsch with pale grains, floral hops, and a dry apple ester following from the ale yeast. 4.8% abv. Kay liked it's refreshing qualities and light body on a warm day. 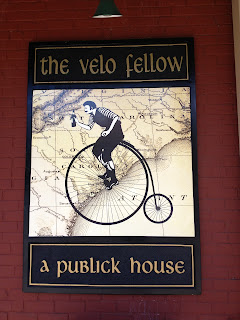 One final comment about our Greenville stay: Mac's Speed Shop, fantastic place for variety of beers on tap (see website link) one could spend hours here trying to make it thru all the pulls. I highly recommend this establishment both for the incredible variety of beers and for the live music, not to mention the friendy and educated beertenders!

The Bastards Are Back!

Yep, the headline says it all.
While I recover from my recent trip to the SC/NC areas of intense craft brewing appreciation and try to make sense of my notes, here's some important info for fellow fans of Stone's Bastard products:
Read it here:
Posted by Marv Parker at 6:34 PM No comments:

As you may know, I've been incredibly busy lately doing research, preparing a move to a new location (those pesky bill collectors!) and bemoaning the fact that I wasn't able to attend the GABF!!
However, I have been able to consolidate a good bit of info garnered from all that research I've drunk, uh, accomplished and decided to spread the word. So, herewith, an updated accumulation of wisdom: 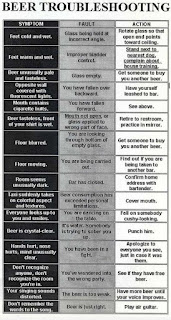 Great News For All Y'all IPA Lovers !

Head immediately to Beercraft's Facebook page (http://www.facebook.com/beercraftllc) and drool over their Sale of the Day: Drake's Denogginizer Imperial IPA.  If you are fortunate to live within a reasonable distance from the store (I'm 10 minutes away) take advantage of JT's 50% off price. A bargain for certain, no other retailer comes close. Of course, the Denogginizer is only on sale today, but tomorrow, another beer will be! We gotta support this store... not just for the sale price but for the amazing collection of brews that he keeps on hand.  I'm getting ready to drink a 22 of Stone's Sublimely Self-righteous Ale... which I found awaiting me at Beercraft.
Get thee there soon!!

The contents of these bottles went very well with out barbcue dinner last night... smoky stouts and barbcue: who knew! Old Rasputin is from North Coast Brewing in Ft. Bragg, CA and the Dogfish Head Chicory Stout is from heaven. 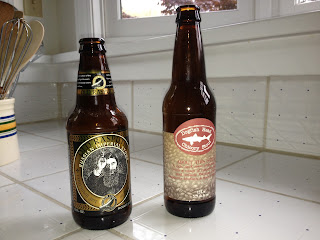 Posted by Marv Parker at 1:47 PM No comments:

Sunday night was our time to see Berkeley Rep's very popular play, "Chinglish" which for us Mandarin speakers is a special treat.

Our decision to have a pre-play brew at Jupiter was a good one, I knew it the minute I saw their guest brews menu: 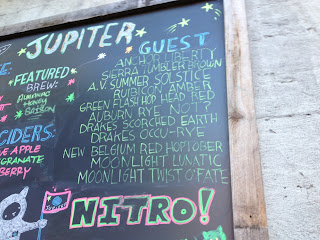 After several minutes of deliberation I finally chose the Drake's Occu-Rye since it was a first for me, but also because I like everything I've ever had from Drake's and it fits with my recent attempts to broaden my horizons, so to speak. I was not disappointed; very tasty, with a good hint of rye in the finish and very dry. Here's how the brewmaster describes it: