Highland Brewing Company has a new Warrior series, which they describe as  having "... bold aromas and flavors, often high gravity, styles will vary widely and will be released a few times per year in limited quantities of kegs and 12-ounce four packs." 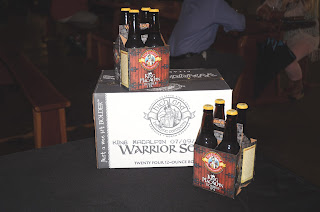 It's a double dry-hopped IPA with Chinook, Amarillo, Simcoe, and Centennial hops and I understand that some Mosaic may have even been added to the bill. ABV is 10% but the alcohol is so well balanced that it's deceptive. You'll want to tread carefully with this one.

CEO Leah Wong Ashburn described it to me as a "lemon hop bomb" and I certainly agree, tho I would also say that, especially in the nose, pineapple notes have taken up residence as well.

This is Hollie Stephenson's best beer yet, imho, in her role as Head Brewer.

I was able to sample it a bit earlier in the week (it was released on Friday, July 17th) at a special event, which was a very rewarding experience. Not so rewarding was not being able to take any home since it not yet been released! Still waiting for it to hit the Greenville shops but, you know, it'd be worth driving back up to Asheville to have some more before it's all gone. It's that kind of beer.


Some photos of fellow craft beer lovers at the event:


My thanks to Molly for the invite. 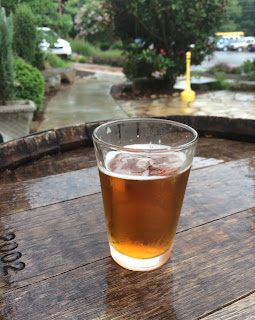