Ashland - Beer and Shakespeare Pair Up

Just back from Ashland, OR, home of the Shakespeare Festival and many places to try some new beers. One is Caldera Brewing with its Tap Room down on Water Street, just off the famous plaza. My first brew was the Hopportunity Knocks IPA (ABV 6.8%) which was just what was needed after a 7 hour drive up from Sonoma County. Caldera has just recently moved into a larger brewing facility and is well known for their canned IPA.
As far as I am concerned, they will hereafter be known for a satisfying, well hopped (Centennial hops, I'm told) brew at trail's end (some poetic license here). 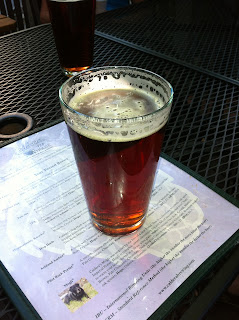