Great time at Heritage Public House last night... Gordon Biersch was the featured brewery and they tapped an Überkeg of Festbier for the evening. Of course, the biggest attraction at Heritage are all the taps available, without fail, one or two of which will be new beers to try.  Last night was a challenge because as soon as Kay and I sat down, I saw that they had Ballast Point Sculpin IPA and since that is one of my top 5 beers, I had to start with that.

Big surprise of the evening: two, count'em, two new beers to try: the Speakeasy Butchertown Black IPA (8.5% abv) and a limited release from Bear Republic, Café Racer 15 Double IPA (8.9%). I highly recommend them both. The black IPA is described as lighter in body than the dark color would indicate and it is dry-hopped. The Racer 15 description from the web page:

" Brewed to celebrate the spirit of the counterculture streetracer motorcyclists and the 15th year of innovative brewing at Bear Republic Brewing Co. Café Racer 15™ is a deep golden Double IPA with a rebellious blast of the resinous, grapefruity aroma of Citra hops and a dry malty finish." 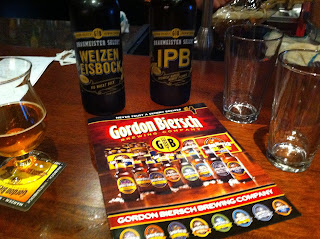 The Gordon Biersch offerings for the evening's event included the two beers pictured:

The IPB (Imperial Pilsner Brau) features hops from central Europe including Hallertau, Tettnang, Spalt and Saaz (don't ask me, I haven't a clue). Brewed in accordance with the German Purity Law of 1516. GB is the only brewery in the country doing it this way. 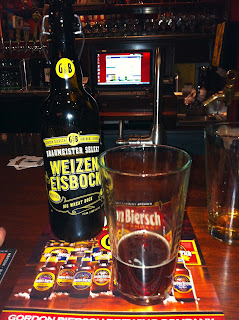 The Weizeneisbock (10% abv) is a highly crafted, strong, dark, wheat beer brewed with a top fermenting Bavarian Hefeweizen yeast strain. Very different tasting experience for those of us who swear "the hoppier the better!" 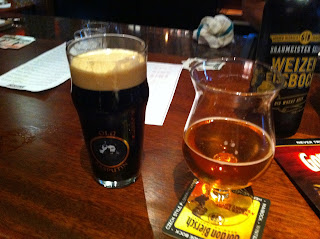 And now, back to our favorites: Kay had the North Coast Old Rasputin (left in photo) and I of course had a second Sculpin. A good time was had by all and no one got their clothes dirty.