As many of you know, last Friday, Feb. 8, kicked off SF Beer Week with a big tasting extravaganza at the SF Concourse. I was able to attend for the first time, thanks to the generosity of the SF Brewer's Guild and the experience was all I expected it to be.

With 65+ breweries pouring, choosing the first one to taste is a challenge. And preparing to take notes is also a big challenge and one that failed me as the night went on... more about that later.
Passing by the Knee Deep Brewery's table (Concord's representative), I saw that their Simtra was on tap... 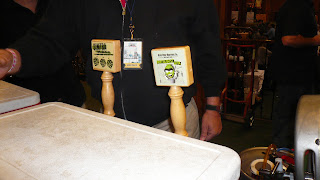 Now, I don't recommend that anyone attending a beer fest start off with a triple IPA,  and I usually don't either but fearing the growing crowd and lines, I decided to throw caution in the dump bucket and went for it. This is an amazing beer, in my estimation, big, big hoppy attitude from the Citra and Simcoe hops. Deep amber color, nicely balanced malt flavors and modest alcohol impact for such a high ABV (10.1%). I only took a small sample since the night was young and I moved on. 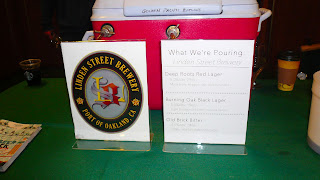 Staying in the East Bay section of the hall, I next found Oakland's own, Linden Street Brewing.  With a goal of keeping the alcohol down, I went for their Deep Roots Red Lager which, with the 5% ABV, is a real session beer and a great way to begin the next 3 hours of tasting (!). An interesting and delicious lager that had a malty front but then had a good hoppy finish. 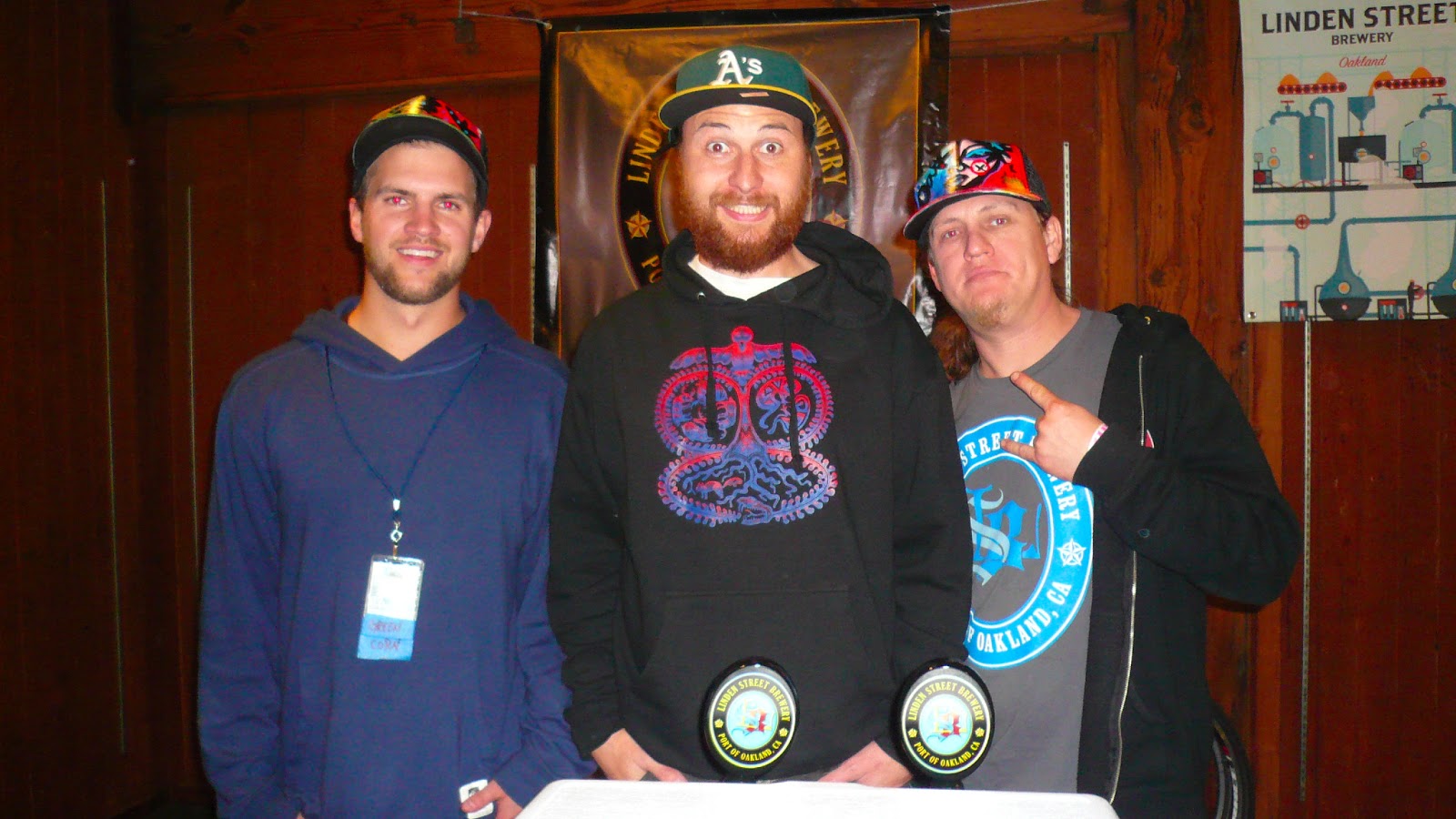 The guys pouring for Linden Street were equally excited about their beers, or so it would appear. An early example of note-taking failure, I don't have their names at the moment. Sloppy, I admit. 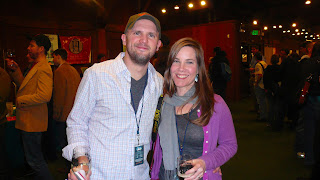 Among the crowd I did run into a few familiar faces, including these two: Ken Weaver and Anneliese Schmidt, the two responsible for the definitive beer guide for Northern California (where I am fortunate to live) titled, "The Northern California Craft Beer Guide." This book is a must have if you are visiting the area and don't want to waste time looking or Googling for a nearby pub. And it's necessary for those who live here cause it's covers some places you might not even think of: Dunsmuir? Quincy? Tulare? Who knew! 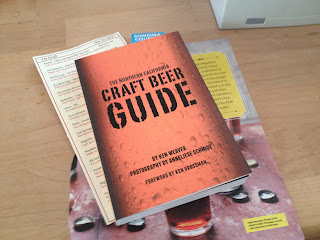 Written by Ken, a beer geek, but much more eloquent, and featuring  outstanding photos by Anneliese, this book travels with me (and has the beer stains to prove it!). 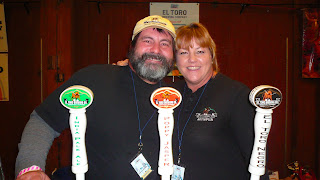 Movin' on I next came to the El Toro Brewing/Brewpub booth where the name Poppy Jasper grabbed my attention. Talking to the brewmaster/owners Gino and Cindy Acevedo, I learned that the name comes from the indigenous quartz found only in Morgan Hill from which they fashioned a 45 foot long bar, highly polished bar surface in their brewpub.

The Amber Ale itself is a dark ale as a result of using caramel, dark crystal and chocolate malts. The hoppy and well balanced finish comes from the Galena, Cascade and Liberty hops, used generously. This ale won a Silver Medal at the GABF in 1996.

Some more samples that I tried included these, randomly chosen here. 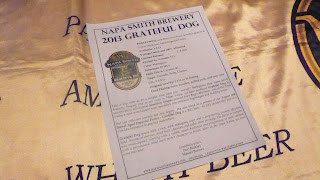 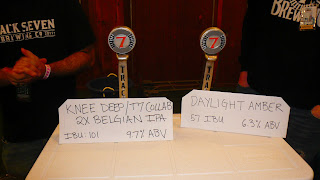 And it grew even more crowded as befits a sold-out event. Here's some video I shot which only covers HALF of the hall!

And of course the usual suspects were also here, pouring their very popular brews (as evidenced by the longest lines). Here's a quick sampling (apologies to those I have left out): 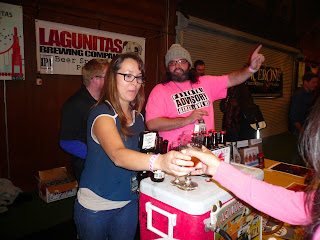 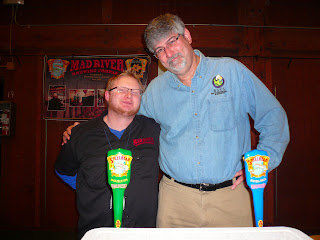 Time to announce my favorite... in this cases, favorites, cause there were two that really impressed me, both brand new and from small producers. So, wait for it.... they are: 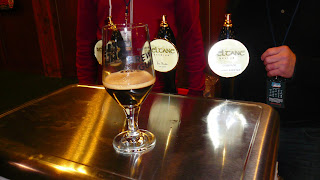 From Beltane Brewing in Novato, Marin County, their Sable Black IPA really made my taste buds stand up and take notice. It's described as having a malt smoothiness with a hop kick in the finish. I describe it one of the best Black IPAs I've had the pleasure of drinking.... and I will definitely drink it again. 6.5% ABV and IBUs way up there!! Thanks to Alan Atha, Brewmaster, and Assistant Mat McGee for the generous pour. 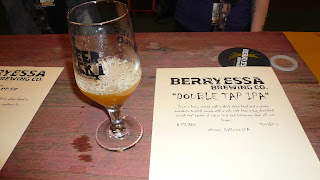 And the other favorite, and no less for being mentioned second, was the Double Tap IPA from Berryessa Brewing in Winters, CA. That's up along I-5 North of Sacramento for those without the benefit of a copy of "Craft Beer Guide" or who usually are asleep while passing thru on the way to Oregon.
It's described thusly on their website:
"Pours a hazy orange with a thick white head and a sticky mandarin-tropical aroma with a rich malt base a hop drenched mouth feel tastes of fruit and bitterness that will not linger.
8.5% ABV | 70+ IBU’s"

I noticed that my favorites were IPAs... well, what can I say? I'm an admitted Hophead! That's my story and I'm sticking to it.

Special thanks to JT Fenn if Beercraft for organizing the bus trip to the Gala so we didn't have to worry about driving home. And a special thanks for breaking out those rare, library beers, Hopslam being one of them.

So, that's a wrap for this year's SF Beer Week Kick-off. Just heard about a Russian River Pliney the Younger being tapped this afternoon, so I'm outta here!
Posted by Marv Parker at 1:08 AM