Interesting story about this rye-based double IPA. From Shmaltz Brewing's He'Brew label, it's called Bittersweet Lenny"s R.I.P.A and is a tribute to the late, great comedian and social commentator Lenny Bruce. You can read more about the back story here, but what you really need to know is that this is a fabulous brew, loved the rye characteristics that met the high hopped flavor on equal terms that led to a well balanced and delicious finish. ABV is 10%, so the alcohol was present but did not deter the flavorful finish in any way. My only complaint: the Tap Room ran out just after they poured my taster!! Bummer!! They only had that one keg so when it's gone..... in the photo below it's the taster on the left. 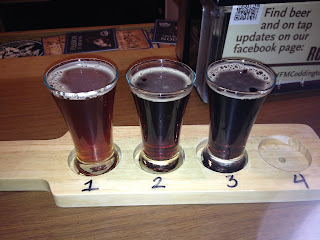 #2 Taster is Wedmer Brothers SXNW ( a play on SXSW which is South by South West, the festival held in Austin, TX each year. In this case, South by North West). It's described by Widmer as American Strong Ale, and with the 9.3% ABV, it is that but so much more. Pours very dark, as you can see in the photo, but not heavy bodied as you might expect. Here's a comment that I read on their web site:

"The initial flavor is of sweet smoky roasted malts and chocolate. No real bitterness in the beer, mostly sweet up front. There is a slight nutty flavor with some dark cherry. The finish is where this beer really shines. Lingering smoky malt, with chocolate, toffee and a spicy pepper feel left on the tongue with a slight pepper flavor. All of the flavors in the beer compliment one another. The flavors seem strange to be coupled together but in the end it's as if they belong together."

The third taster in the photo is a Schwarzbier Black Lager from Kostritzer Brewing in Germany. Very different from what I usually drink, but I liked it as I gain more experience with Black Lagers. Here's a description I found on the Beer Advocate web site:

"The flavor is of dark-roasted malt, chocolate, coffee, and a touch of hop bitterness. Mouthfeel is medium, and Kostritzer finishes fairly crisp and refreshing. Drinkablility is superb with this one. For a black beer, this is about as perfect as it gets."

Well that was a busy evening, as you can see, and very educational too -  a win-win session for me!