International Women's Day!
Which conveniently leads me to today's subject: the first female Head Brewer in Greenville (and only second in the state), Hannah Morris at Quest Brewing Company. She recently took time out from a busy cleaning and canning day to chat about what the position means to her and the path that led to this appointment.
I first met Hannah when she was pouring at Upstate Craft Beer Co. (now Eighth State Brewing) back in 2014. She pointed out that by 2011 she was already exposed to craft beer, pouring at Nose Dive.
By 2013 she had already started as a home brewer, like so many others now working in breweries, brewing with her friend Sean Lally. She confessed that their first effort went right into the drain. Her first all-grain effort was an imperial stout with rum soaked raisins, cinnamon and vanilla. She describes it as "pretty tasty."
Her entry into the real brewing world at Quest began as Production Assistant and Brand Ambassador, using skills fostered at a local distillery where she was the Director of Customer Relations. But her actual first introduction to Quest was as a volunteer, coming in couple days a week to help out with canning. That exposure led to her being hired. Yes, boy and girls, hard work does pay off.
Last October (2018) she was promoted to Assistant Brewer, working with Sean and since then has brewed three original beers; first was a Green Tea IPA, then a Raspberry Porter (which I really liked, dark chocolate and raspberry flavors beautifully balanced) and now her latest creation, a Lemon-Lavender IPA, also well balanced. Fans of the Sun-WuKong, their New England IPA (and there are many, including me and the #GVLBrewCrew) will be very pleased to learn that among next month's releases will be the latest iteration of this IPA, Hannah's first as head brewer. She wants it to do justice to Sean's introductory version which was eagerly accepted by craft beer enthusiasts.
When I asked her about future brewing releases, she revealed her like of Belgian styles which she admit first drew her to Quest. She also likes lagers and hopes to do more funky beers using the barrel-aging facility across the street from the brewery.
Finally I asked her about any advice she might give to anyone trying to break into the craft beer field, male or female, her response was, "don't give up and be willing to take any position... and bring as much as you can to the table,... keep your options open, a jack/jill of all trades."
It certainly worked for her. Brewing creative new beers, keeping the Quest role in the local community a very active one and expanding the future possibilities.
I say, well done, Hannah, well done.
A few action shots of her displaying the varied activities that her role involves: 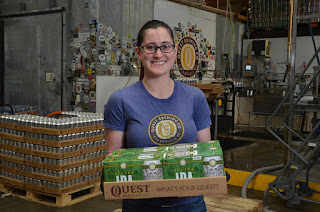 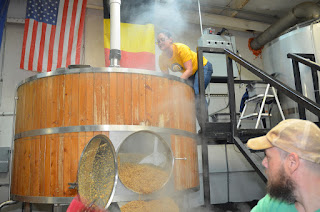 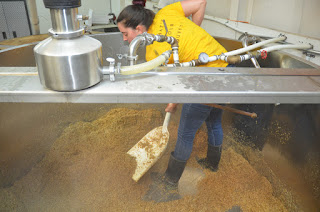 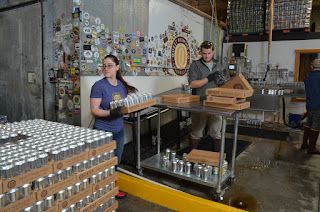 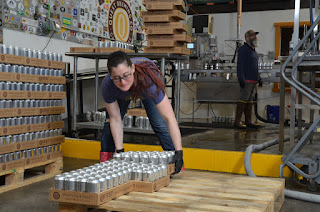 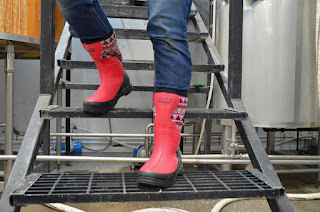 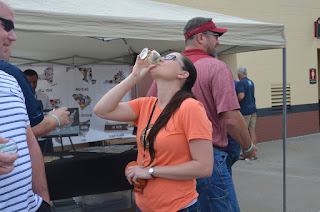 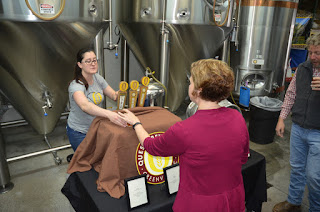 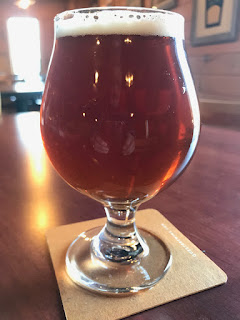