Filling my busy schedule (it could happen!) with some research, largely from this very informative and interesting book (see pic below). So the question arose, where did this entity, AB InBev which claims one third of the world's beer, come from? I found the story very compelling.

It starts in Belgium where until 1987 the two largest and market dominating breweries, Stella Artois and Jupiler, had secret agreements to control prices. In '87, they made the arrangement official, merging to become Interbrew.

Interbrew then began a series of acquisitions which included British Bass and Lowenbrau.
In 2004 things got even more interesting when Interbrew merged with Brazil's AMBev, itself a merger of two former competitors which dominated the local beer markets. From that came InBev.

During this time things weren't going well with the Anheuser-Busch family, due to a "volatile relationship" between father and son, August III and August IV Busch. Thanks to that turmoil, InBev made their move to take over AB. Essentially a hostile takeover since the Busch family controlled less than 7% of the company, in 2008 when Warren Buffet agreed to sell his shares, other shareholders did likewise.
Thus, AB InBev.

Another side story that caught my attention, certainly due to my Northern CA roots and history of drinking Lagunitas beers at the Petaluma brewery, was the time line of Heineken. The Heineken family founded it in 1864 and it still is family owned. Responding to the AB InBev growth, Heineken made some acquisitions of its own, including Newcastle (brewer of that fine Brown ale). Their strategy consisted of investing in local brands in emerging markets. Which brings me back to Lagunitas. Not exactly in an emerging market, too well known for that, but a very desirable investment. So, in 2015, Lagunitas initially sold 50% interest to Heineken, probably with visions of Little Sumpin showing up on shelves throughout the Netherlands. Last year, Heineken assumed 100% ownership.

It's my personal belief that Tony Magee (Lagunitas founder and executive chairman) made that decision based on a desire to never be owned by AB InBev and joining the Heineken family would preclude that.
So, in 2014 AB InBev, SABMiller, Heineken and Carlsberg combined to claim over 45% of all the beer in the world. Whew!

And to sum up, I'm pleased to announce that 99% of the beer in my fridge is craft beer (we keep a Yuengling on hand for brother-in-law). Speaking of which, I'm gonna go have one and bring this history lesson to an end.
Cheers. 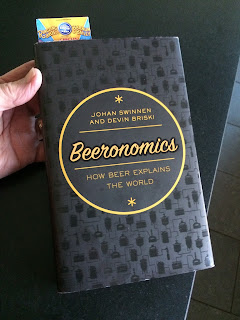