t appears that the rain has stopped so it's time to wring out the keyboard and get back to delivering beer news.
So, this past weekend was New Brew Saturday so a group of fellow enthusiasts and I headed to NC with a modest agenda: two new breweries. Didn't quite work out that way, as you'll see.
First stop, Columbus, NC, where the only brewery in Polk County is located, Winding Creek Brewing Co; Les Potter, Brewmaster, explained that his first introduction to home brewing came while attending some Scottish games, which might explain why his Heather Hearth Scottish Ale is one of their signature brews. A traditional styled ale with an abv of 6.5%, our entire group liked the beer (we tasted flights of all beers on tap, which come in assorted airplane shapes) and would have it again, the true test. Another Scottish ale on tap was Animal Pancakes Maple; not sweet but nicely flavored, well balanced; the group liked this one as well. As you can see from the menu photo, there is quite a range of styles available. Side note: the building was once a recording studio so the audio baffling along the ceiling helps with the sound when weekly live music is performed there. Well worth the visit, just east of I-26.
(Next post features our second stop)
http://wcbrewco.com/ 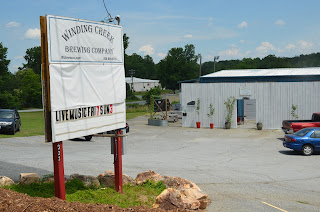 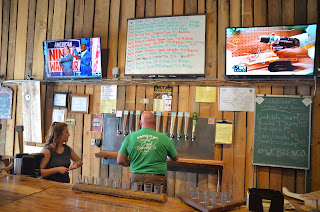 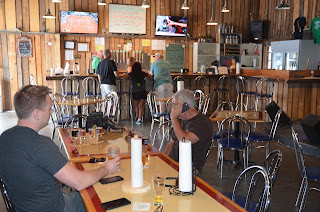 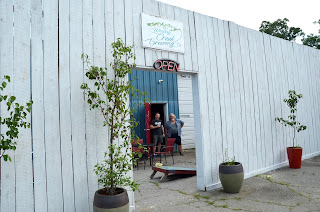 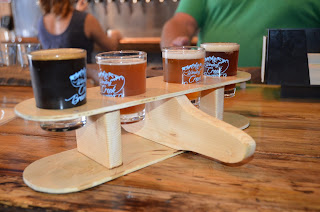 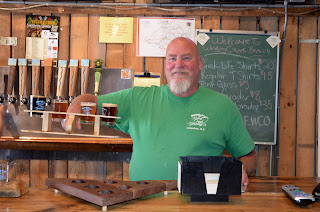 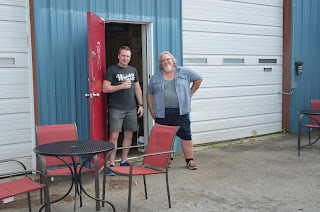 New Brew Saturday, second stop.
A Google search by Jason turned up this new brewery, Hickory Nut Gorge Brewery in Chimney Rock, not so far off our planned route, so we headed out.
What a location! Right beside the Broad River, with decking that goes down to the water, mountains and Chimney Rock providing a backdrop of natural beauty, perfect for relaxing with a cool pint. Made for lingering, I might add. Of the offerings that day (check the menu photo) the Nitro Stout and the Merritime Barley Wine were hits with the group. The beer lineup changes frequently I was told, but there will always be a couple of guest beers and ciders on tap. 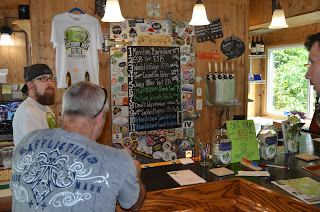 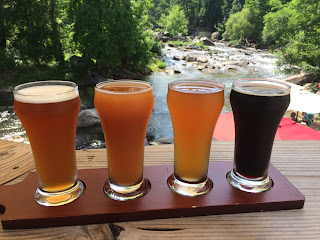 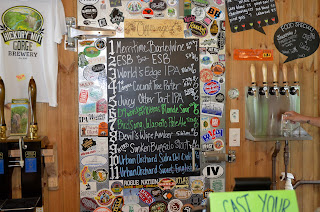 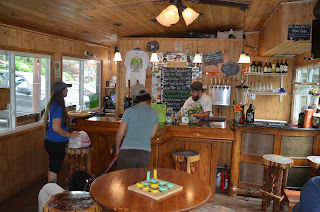 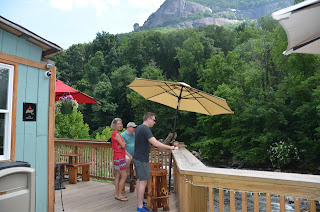 New Brew Saturday, third stop:
One of our original destinations was this brewery, Whistle Hop Brewing Company located in Fairview. Part of the excitement for me, being an unabashed train nut with my own Lionel set, was the setting: a caboose and boxcar perched atop a small hill, easily seen from the road and offering great views of the surrounding valley. Oh,.... the beers.
Well, we hit the rail on the head (pun?) on this stop. Along with the free peanuts, we liked all three of their beers (see menu, theirs are circled in pink chalk) and were very fortunate that they tapped a Honey Fig Saison just after we arrived. Full of flavor, saison style, not sweet but definite fruit notes, a satisfying beer. I found a new friend in the Pale by Rail Pale, an abv of 5.2% making it almost sessionable. Fun spot, the tap room is a very compact end of the caboose and the cupola seats are made for sipping a beer while enjoying the view. I can't recommend this place highly enough. It was also here that we learned the location of our fourth stop, coming up. 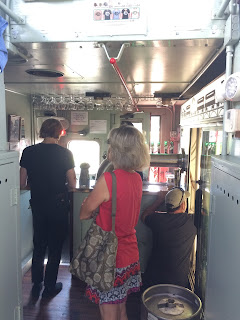 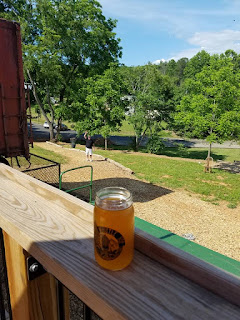 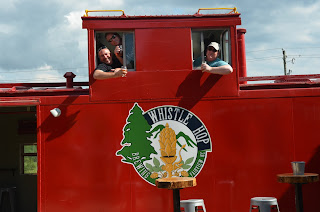 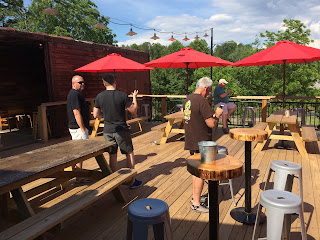 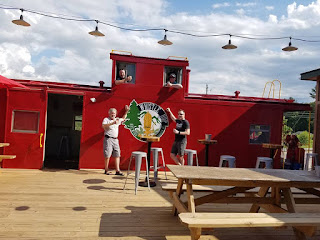 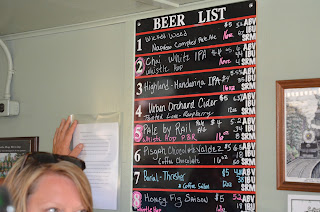 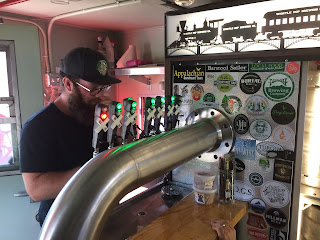 Turgua Brewing. Never heard of it? We were in the same boat until a fortuitous tip from a beertender at Hickory Gorge led us to ask at Whistle Hop about it's location. Turns out, not far away at all, so continuing the crawl we were on our way. Not an easy place to find even tho we had good directions. When we hit the dirt road, we knew we were about to find it. And what a find it was. Basically Phil Desenne, owner and head brewer, is brewing (legally) out of a garage on a gorgeous property, beside a large garden and meadow. A singular discovery along the NC beer trails. On to the beers, which are mostly named after birds. More about that later.
My and Kay Bingner's flight was the Firefly, Towhee, Frayzon and Waxwing. I also tasted the Sapsucker which was so good I had a pint of it. Adding some bread and cheese to the mix, we stayed there the longest, listening to some live music, thoroughly enjoying the surroundings and agreeing that this place was the perfect spot to end our New Brew Saturday. We'll be back and I encourage any and all to do the same. You won't regret it.
Oh, Turgua is a term meaning "Valley of the Birds" in Venezuela, where Phil is from. See the connection now?
http://www.turguabrewing.com/ 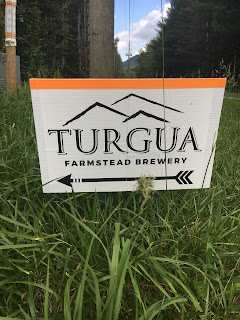 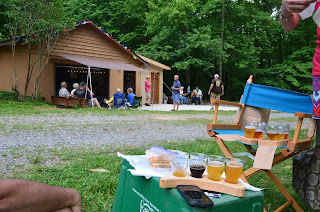 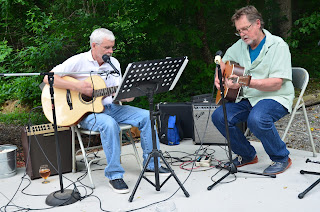 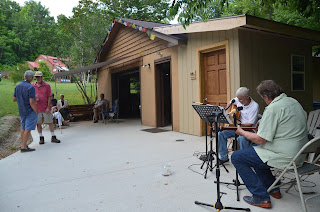 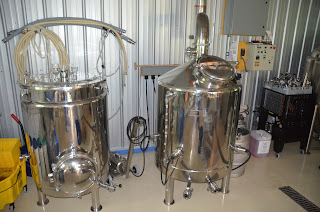 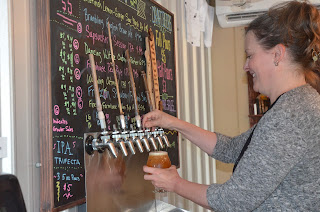 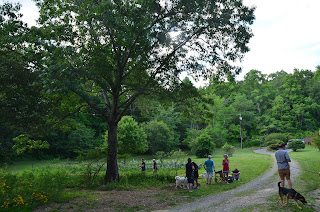 Where's our next New Brew Saturday? Stay tuned to find out.
Cheers.