An Air Force Unit reunion leads to some beer discoveries. Read on. 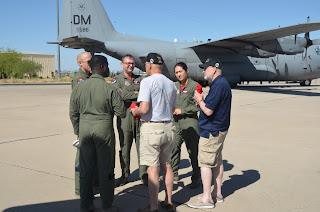 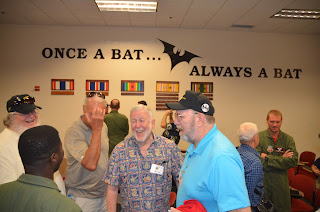 While in Tucson for an Air Force unit reunion, had no choice but to check out the craft brewing scene. And there was indeed a lot to check out.Tucson has a very thriving beer community with more on the way.
I volunteered to host a pub crawl so was forced to make some decisions about which ones to visit. Location was important since these old guys I was with couldn't walk too far. Fortunately one was on the way to downtown and the other two were a block apart. I also had one backup in case we needed another but time ran out, as often happens with these events. 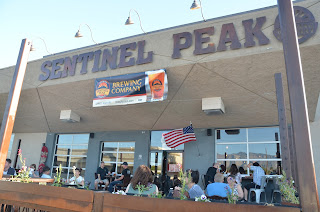 First stop, Sentinel Peak Brewery. Sentinel is a 3 BBL nanobrewery, which opened its doors in January, 2014. 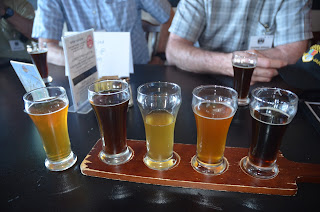 I suggested we start with tasting samplers so that folks could discover which styles they liked, while at the same time keeping the alcohol intake low. Several of the group had never seen a tasting flight, so the education level was high on this tour right from the start. The samplers included the Icebreak IPA, Alc/Vol: 6.3% IBU: 82; the 1811 Desert Blonde, Alc/Vol: 5.2% IBU: 29; the Heat Wave Hefeweizen, Alc/Vol: 5.1% IBU: 14; and the Dew Point Dunkel, Alc/Vol: 6.1% IBU: 27. I added their Overhaul Spicy Chili, being a fan of chili beers, but this one was too hot to enjoy!

One bit of coincidence, totally out of the blue: our group is formed of Chinese linguists, (known as Bats cause we were air crews in special C-130s flying missionsout of Yokota, Japan and Da Nang, Viet Nam, hidden away in dark cubicles) and the co-owner of Sentinel, Jeremy Hilderbrand was an Army Russian linguist. Just confirms what I've said many time, the brewing community is a small world. 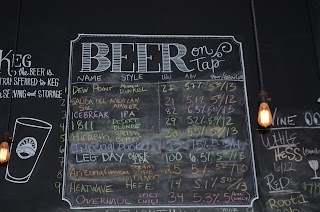 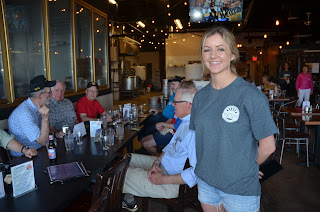 Thanks to Rachel De Cesari for her help in getting our group supplied with beer. 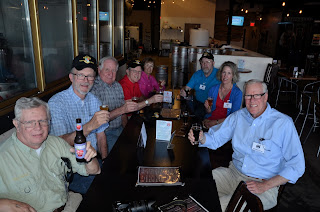 Next crawl destination was Pueblo Vida Brewing Co., located downtown, not far from the infamous Congress Hotel. While there I was fortunate to meet Owners  Kyle Jefferson and Linette Antillion (Kyle's the Brewmaster), busy hosting the quarterly AZ Brewer's Guild meeting. Most of AZ's craft beer owners/brewmasters were in that one room! The noise level and beer drinking activity was appropriate for the occasion. 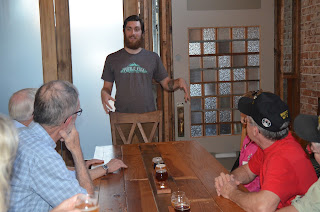 Staff member Billy Krukowski gave the group an introduction to PV, describing their beers and their facility made of mostly re-claimed materials, some of the wood being from the original structure. 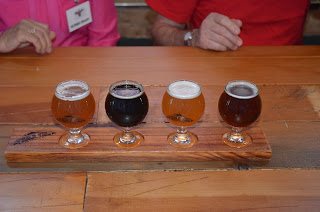 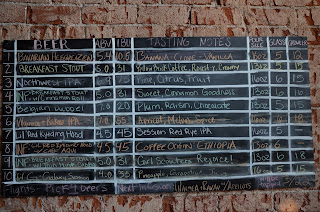 First of several tasting flights, we sampled 8 of the 10 offerings. Their Northwest IPA was a favorite as was the Li'l Red Ryeding Hood session rye IPA. All well made beers and worth trying again. The Northwest name is in reference to the brewing Kyle did at Lazy Boys Brewery in Washington state, where, coincidentally, he co-brewed with Tim (last name to come) who later came to Asheville to start Burial Brewing, the new Sour headquarters. 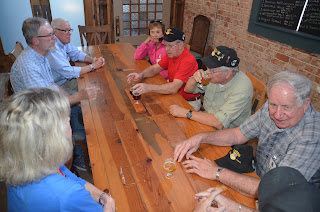 The group was very eager to learn about the different beer styles and to expand their tasting experience. I always appreciate a group that is genuinely interested in learning about beer and the brewing process. 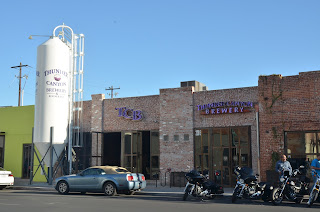 Our last stop for tasting and for dinner was the Thunder Canyon Brewery, one block away. Turns out, this was their brewpub but actual brewing took place at another facility north of town and too far to include on our travels. None the less, all their beers were available so we continued out practice of getting tasting flights, letting people choose their favorites and ordering pints accordingly. 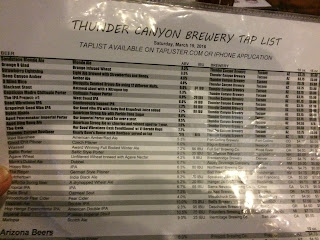 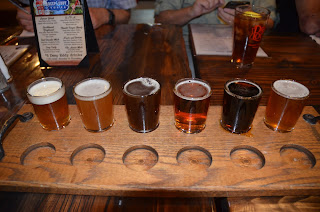 This was a full range of styles, choosing the first 6 to sample was a bit of a challenge. I went with their cask conditioned Good Vibrations IPA w/El Dorado hops for the hop fans, chose their Deep Canyon Amber for the hop-shy and added their Aged Bing Bang Ale, an aged American Strong with cherries and raisins, to demonstrate just what extremes some breweries are achieving in their efforts to find new flavor profiles.

By now, everyone was comfortable with the format so before long, most had a pint in front of them while thoughts turned to dinner! I consider that a success and my work done. Now, let's chow down! 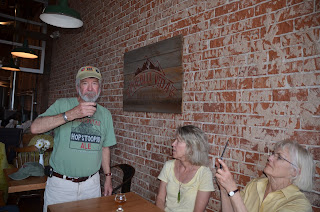