Putting Voodoo Doughnuts and Rogue Beers in the Same Sentence 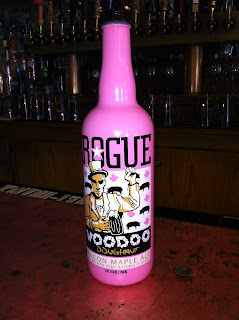 Two great Oregon institutions: Voodoo Doughnuts in Portland, Rogue in Newport, have crossed paths at last in the form of... wait for it..... Voodoo Doughnuts Bacon Maple Ale. I have a picture of the bottle over there to prove it. 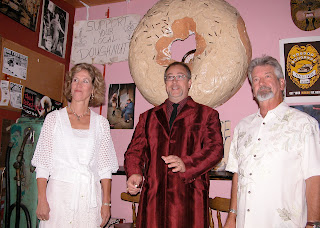 My two connections to these entities: One, I was married at Voodoo Doughnuts in Portland (that's my wife Kay and wedding official, Cat Daddy himself in the photo with me)... 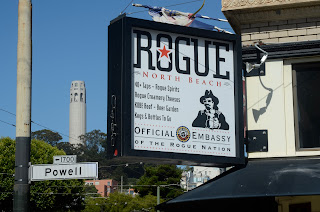 ...and, two, today we visited for the first time the new Rogue Pub in San Francisco's North Beach, where I found the pink bottle available for sale. I did not try it, somehow just not in the mood tho I'm sure it's as tasty as Voodoo doughnut's infamous Bacon Maple bars, the ale's name sake.
I did try Dad's Black IPA from Rogue, which was full bodied, had a strong malty finish without being overpowered by too much hoppiness (if there is such a thing); all in all a well balanced example of the style which I will certainly order again sometime.