Saturday's Beerfest 21 - The Good One, held at the Well Fargo Center in Santa Rosa, CA was as much fun as anticipated and more so! Sunny and warm with an easy breeze blowing through made for a comfortable and beer-friendly afternoon. So, what follows are some photos and thoughts, in no particular order but I will save the announcement of my favorite beer of the day until the last. Cheers! 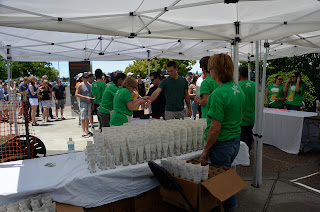 Knowing that folks were eager to get to the beers, the organizers got us through the wristband-beer glass routine very quickly. Off to the tents!! 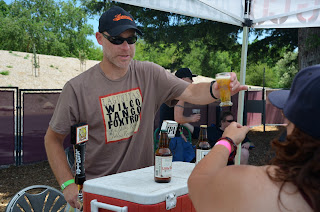 ...where they were pouring Lucky 13 and the ever popular IPA. Little Sumpin fans like me had to settle for the bottled version, but it was still good. WTF was a seasonal favorite of mine as well, but gone now, alas. 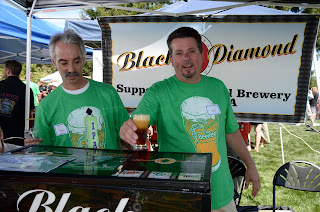 Concord at one time had coal mines,  one called Black Diamond as I recall. These days the name is associated with some excellent brews: this one being handed to me is the Red Ale; big, caramelly and hoppy with the right touch of maltiness for my taste. A pleasant 6.7% abv made a safe second round, especially when BD's Mike Pierce told me that this was the first outing for their Red... sort of testing it under actual beer drinking conditions. I liked it and hope they keep with it... makes a visit to CoCo county worthwhile. 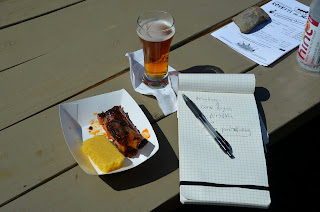 People frequently come up to me while I'm covering some beer-centric event, wanting to know, "how do I become a beer blogger?"  If I can't get them to go away with a hard stare, I'll usually tell them it requires the tools of the trade and the journalistic devotion to using them. Here they are:
1. Beer
2. Rib and corn bread
3. Notebook to record what you've tasted so that you can remember the next day what the hell you had. And, a trusty pen, of course. The rest is just a matter of getting out there and asking questions and hoping for a lot of free beer.

Came across these lovely ladies who were obviously so impressed with the Beerfest that they wanted their visit documented, as only a friend with a digital camera can do.
I confess that I did volunteer to take a pic of all, at which point I was inundated with 5 cameras, each with a request to take a picture. The great thing about a beer fest like this is, before long, you are more than happy to comply. I hope they enjoyed the photo I took and that it was in focus. 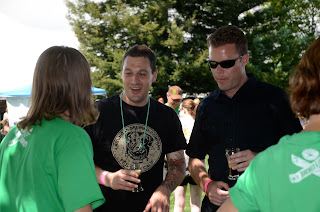 Of course, the other side of an event for beer lovers like this is, there are people who are seriously into not just drinking the beer, but who want the "back story" as it were. These two guys, one of which is a stand-up comedian (on right), had several questions for the Sierra Nevada folks who were pouring.
(Note to wannabe bloggers: be sure and get names before they stagger off). 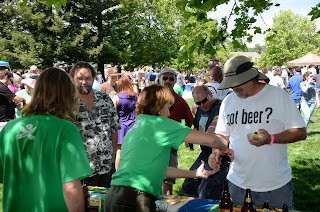 Sierra Nevada was only pouring bottles this day, but that did not deter too many beer lovers, the line was there for most of the afternoon.

Apparently, there's a law that says you can't have a beer festival without Big Sky Brewing's Moose Drool.
So, here it is. 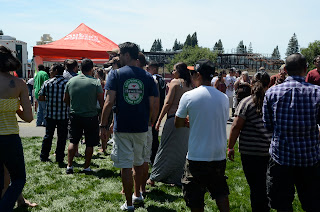 One small downside to the event was the long lines for some food vendors. Apparently the fish tacos offered by Rubios was worth the wait... me, I decided to pass and try yet another brewery. 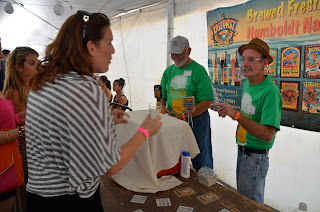 And I'm glad I did because I took the time to visit one of my favorite breweries, Lost Coast from Eureka. I tried their Double Trouble IPA, an imperial double IPA, which was refreshing, hopped enough to bring a smile to this hophead's face, with a crisp, clean after taste. Here's a review I found:
"Hoppy up front, with some resin, pine, and grapefruit bitterness. Maltiness is there in the background, slightly sweet, with some caramel malt flavors. Finish is crisp with more hoppiness. Mouthfeel is good, full, with good crisp carbonation.Overall, a pretty solid beer. It kind of drinks more like an IPA instead of a double."
Couldn't have said it better myself. 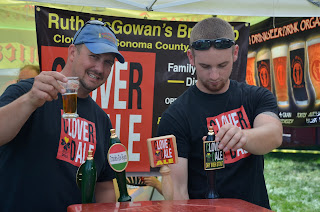 If you've seen the latest Celebrator (June-July) then you know that the folks at Ruth McGowan's Brewpub are having just too much fun. Here, they were happily pouring a Drinko-de-Rye'o, which I suspect has something to do with a certain holiday in May, around the 5th? Whatever, it was good and made me want a fish taco to go with it but.... see above. They were also pouring their Dry Irish Stout but I never made it back to try it. I've had it before at their Cloverdale brewpub so I know I like it. Next time I'm there I'll have two to make up. 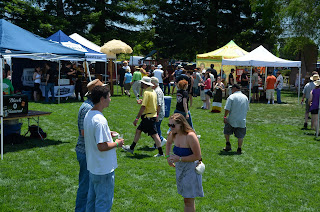 Crowds weren't too bad most of the day. 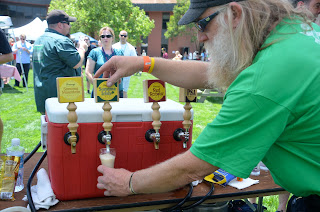 In photography, this is what we call an "action shot." In beer drinking circles it's called, "hurry up already!" 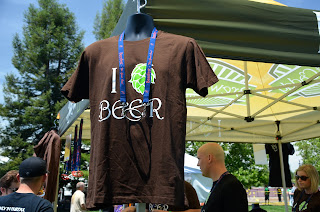 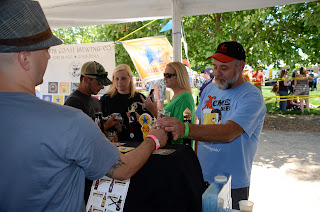 Acme wasn't pouring but obviously someone at North Coast remains loyal to an early craft brewery, if not the first (ask Fritz Maytag), even while allowing participants to sample some of their most excellent brews. No trip to Fort Bragg is compete without a visit to their brewery and pub... their samplers are amazing. I'll be covering that in a future post. 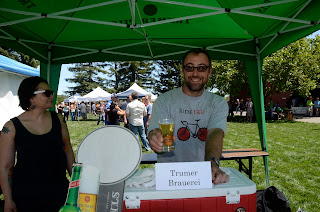 Here's an interesting story. The ingredients for
this Pilsner come from Austria and are assembled and brewed in Berkeley. Very refreshing on a hot day and even tho I am not a big Pilsner fan, I thought this was a well made beer and could imagine how it might enhance the flavor of a good Brat!!

OK, so you want to know which beer I enjoyed the most. I have difficulty saying the "best" beer because they are all good, so it comes down to which one affected me the most this particular day. And it was a surprise. Here's the photographic proof of..... wait for it.... Drake’s 1500 Pale Ale – 5.5% ABV

Not normally a pale ale drinker, I was amazed at this extra hoppy version. According to the brewmaster this was the strategy: "Loads of Simcoe and Amarillo hops are blended in the fermenter just after fermentation has finished to impart a huge aroma of pine and citrus."  It was certainly special and I unapologetically went back for seconds where I met..... 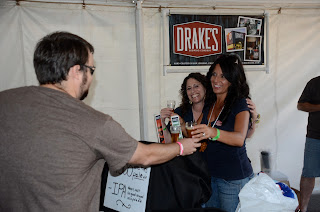 ...these two ladies who were pouring all that goodness (and being very generous about it). My apologies for not getting their names but by this late time of the day, I was concentrating on reassuring myself that I had made the right call.
Again, every beer/ale served that day were all great and I would not hesitate to order any of them at a local pub, but, we are talking about which beer made the most impression on me, this particular day, and without doubt, the Drake's 1500 extra hoppy Pale Ale really caught my attention.
Posted by Marv Parker at 12:10 AM