Some beer blogger has said (and that's a shaky recommendation from the start) that Oregon-based Deschutes has chosen Asheville as the location for their brewery expansion. Deschutes in response says, not so fast. Who's right?  We'll know before too long but in the meanwhile, I'm eager to get some fresh Deschutes. They made their reputation early on with their Mirror Pond Pale Ale, but everything I've had of theirs (and I've been to their Portland brewpub) is very drinkable.  Time will tell, in the mean while, here's a photo of their Portland outlet. 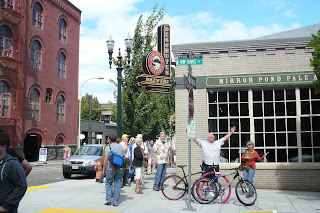