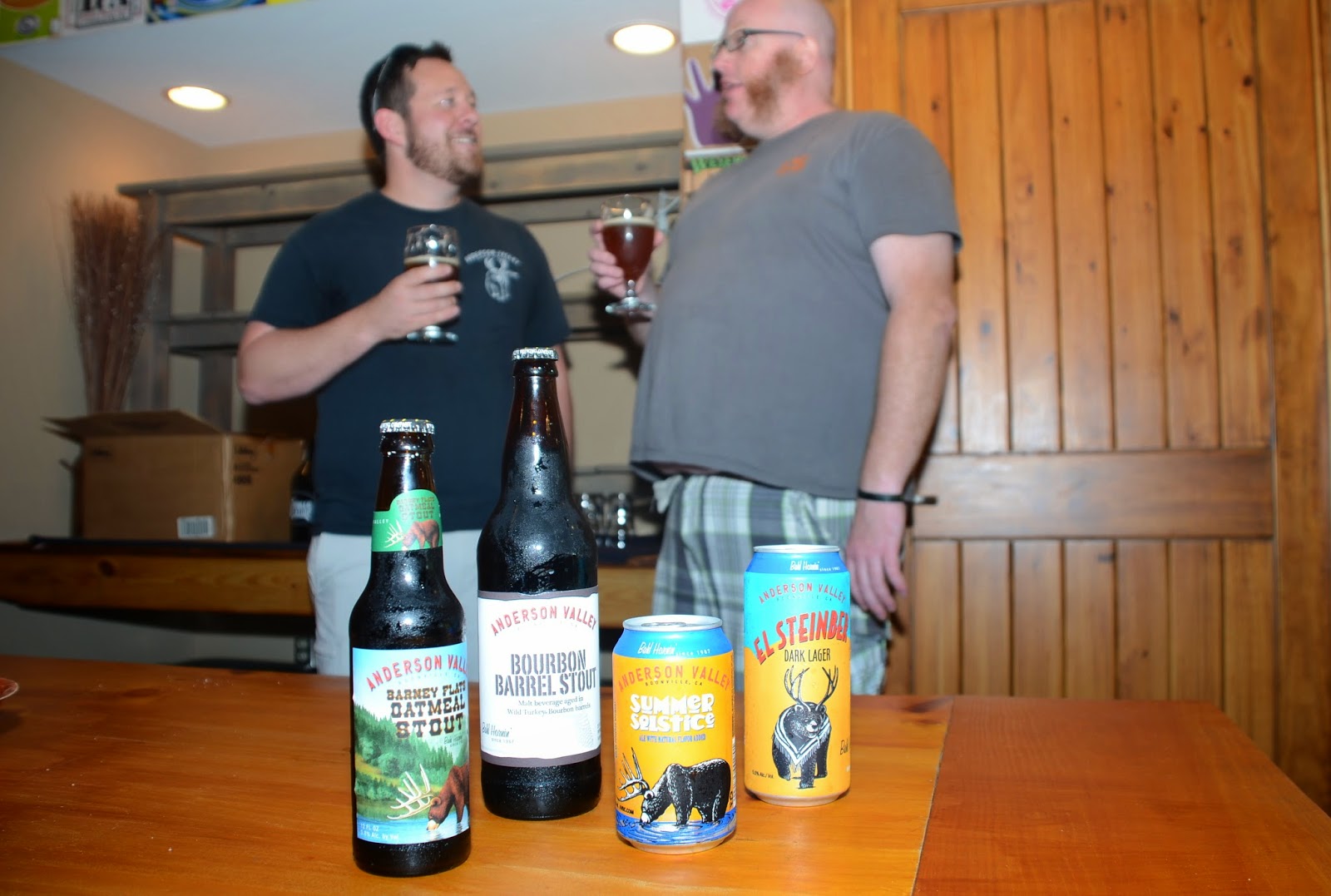 Fun and educational night at the Greenville Growler Station. Anderson Valley Brewing Company, from Boonville, CA, had a tasting of some of their most popular brews, and a very rare one. 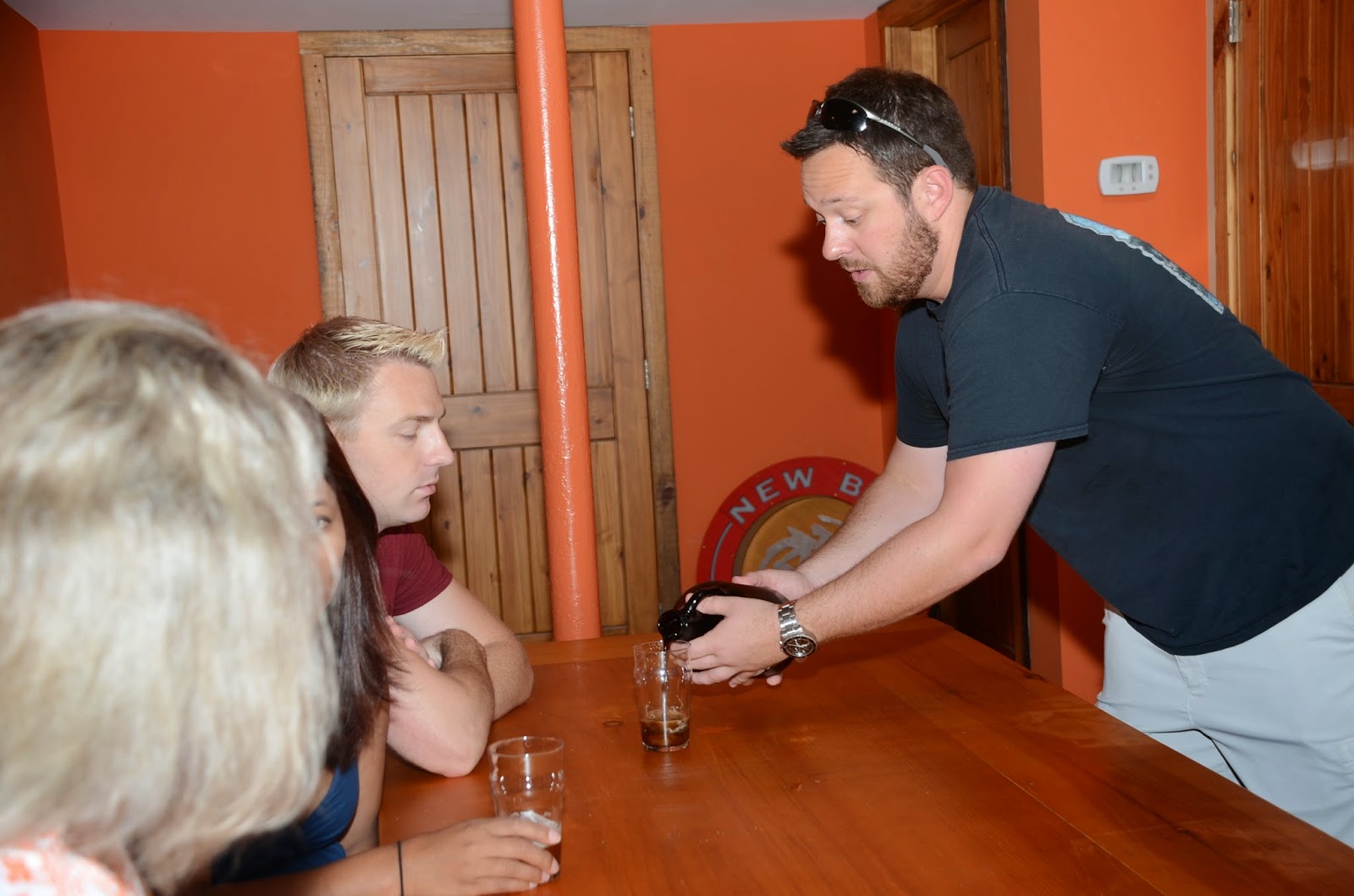 I was glad to be part of the crowd as Todd Hamrick (Steinber Chucklehead to his Boonville co-workers), Area Sales Mgr. to the rest of us (@ToddAVBC),
told us about the recipes, attributes
and AVBC history.

AVBC has an exclusive relationship with the Wild Turkey distillery in Kentucky to get their used bourbon barrels. It makes that Stout a flavor bomb that hides the 6.9% abv quite nicely and lingers on the finish. Only beer that we moved on to a pint with.

The night's fun brought to mind the first time I ever visited the Mendocino County brewery, about 3 hours north of San Francisco.

Many are familiar with the little coastal village of Mendocino, along Hwy 1 and the Pacific 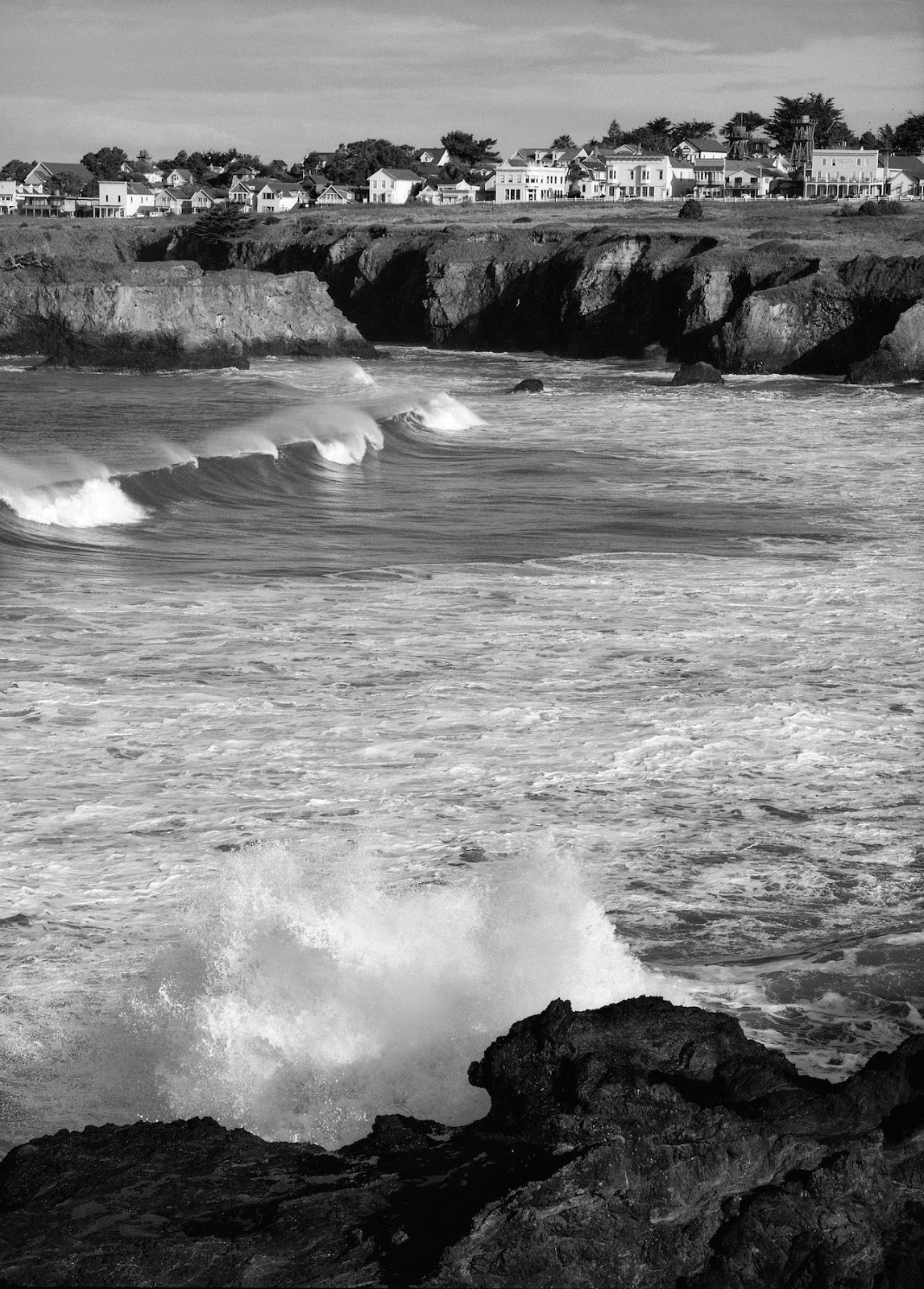 Ocean. At one time, in the 60's, it was a hippie haven but transformed itself into very popular romantic getaway destination. A plethora of B&Bs, good restaurants (and a few tacky ones) and great coastal views draw visitors from around the world, as well as those of us who lived in N. Calif.

Getting there was a bit of a challenge, road-wise, because it required one to leave Hwy 101 in 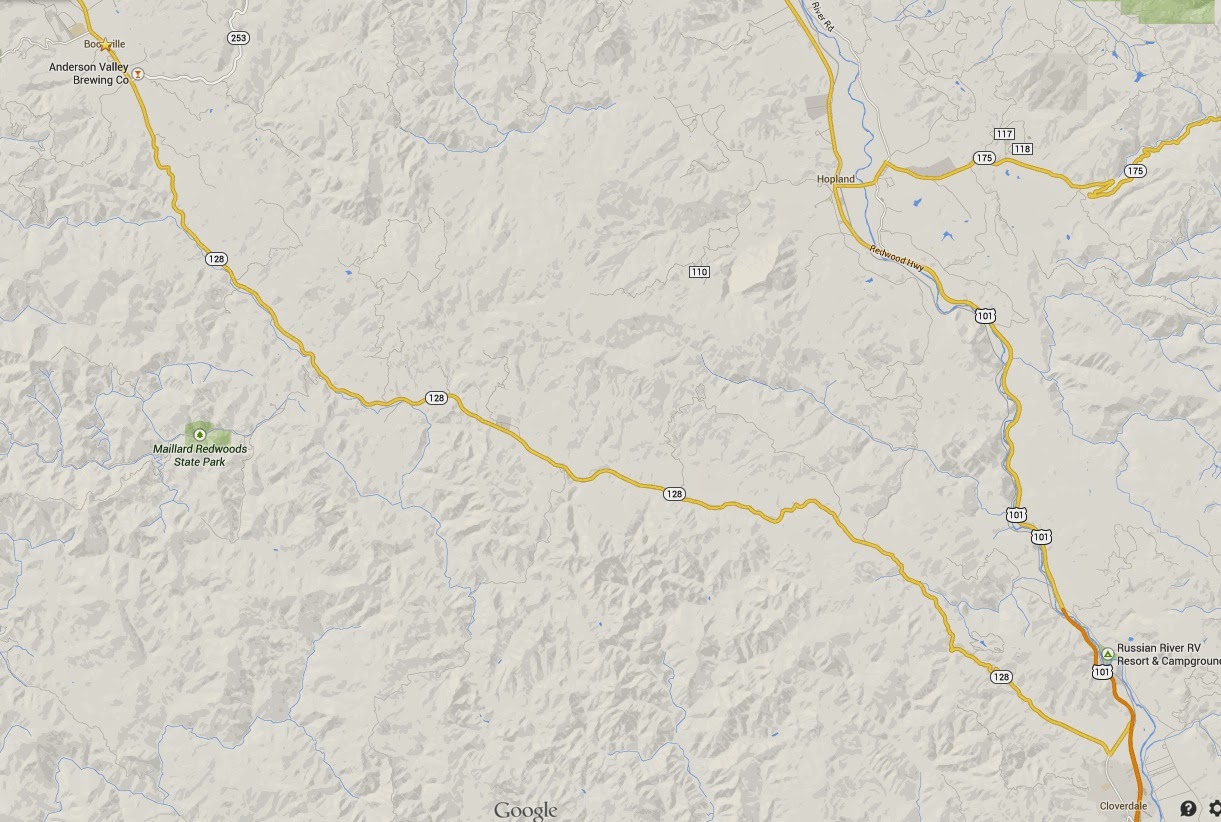 Cloverdale, head west on a narrow and winding road into Anderson Valley. Well worth the effort because AV is a gem; a narrow valley, less than 20 miles long, known for excellent white wines and pinot noirs. (See Husch, Navarro and Handley wineries for examples). The valley has two main towns, Philo in the western part and Boonville on the east, the first one you come to.


And there begins the tale.


It was probably in 1987, since that is when the brewery started, on a day trip to Mendocino (yep, we youths would go up and back, 5 hours on the road, in a day from SF), when we decided to stop for lunch in Boonville, a small valley town with no stoplights. The town's claim to fame was mostly that it was the home of the county fairgrounds so it was busy at least one week a year. It did have one hotel with a well-regarded restaurant, open for dinner only, and one actual restaurant, the Buckhorn Saloon.

Seating ourselves at a table in the Saloon, to my amazement I noticed that the menu offered beer tasting from a brewery in the basement. And that you could get something called "samplers" of the beers available. That was something totally new in my world so of course I had try them. My memory is hazy on the details but I do clearly remember that we were served 4 samples in what were most likely little 2 oz. glasses, placed on a place mat with the names and descriptions  of each beer. Revolutionary!! At that time, I was not a big beer fan, drinking mostly lagers from Henry Weinhard or Rolling Rock. Cold and wet were my principal descriptors.

That was about to change.

I wish I could remember, one, which beers we tried, and, two, which made the most impression on me. Alas, too many lost brain cells for that to happen, but I do know that from that day forward, I would always stop there, sometimes going and coming, on any visit to Mendocino, and later when a group of us would camp in Hendy Woods State Park, about 8 miles west in Philo. I took away the idea that ales were beers too, and not necessarily some heavy, dark, somewhat bitter brew. Unfortunately, the beer was only available at that spot for several years, before it started showing up on taps in nearby towns, Mendocino being one of them. (Of course, years later I discovered North Coast Brewing in Fort Bragg, a few miles north of Mendocino, but that's another story).

In that same time period, late 80s and very early 90s, I discovered Sierra Nevada Pale Ale and my future beer-drinking path was set.  No more weak, yellow, rice or corn based fizzies.

Anderson Valley Brewing moved into their new facility in 1996 and we've visited it several times. I'm still impressed with its size, it's almost as large as downtown!! Very comfortable tasting room and now there are certainly more than 4 samplers available.

I recommend a visit to anyone who finds themselves in Anderson Valley and wants a break from the many wine tasting opportunities there. And while you're there, have someone explain to you the intricacies of the "boontling" dialect. A good story while sipping some very good beer.