Interesting and educational event happened chez nous this past Sunday at a dinner gathering with some friends. After finishing off the cedar-plank grilled wild Alaskan salmon, time came for dessert which was a delicious pie from Upper Crust bakery. They specialize in gluten-free pastries, which is a requirement for 3 of our guests. Good so far. Then I pull out a special bottle of beer that I have been saving for just such an event, a Ballast Point Victory At Sea Imperial Porter with vanilla. Poised to serve its black, malty goodness I was until reminded that it contained gluten, so it was not acceptable. Duh!


So, what to do. Decided to contact Judy Burgio who is not only a certified nutritionist and healthy living adocate but also was one of the guests who goes gluten-free. She gave me a heads up on the gluten problem with beer:

"Gluten in beer comes from any gluten grain used to produce the beer. Generally beers are made with barley or wheat. However, gluten is contained in oats and rye as well."

"Celiac disease is the most severe gluten intolerance issue. It's an auto-immune disease and even the tiniest bit of gluten causes damage to the digestive system and immune system."

(You can read more of Judy's comments at her website, http://judyburgio.com.)

Ok, so what does a beer lover do if that person is gluten intolerent? Fortunately, those good folks who produce so many fabulous craft beers (and you know who you are) have risen to the occasion, so to speak, and are producing more and more gluten-free (or near free) brews.

Here's a representative sampling, thanks to Beercraft in Rohnert Park which always seems to have the beers I need.

Omission beers are brewed by Widmer Brothers Brewing, Portland. I found this statement by the  CEO:

“Beer really is a connector in our society,” explains Omission CEO Terry Michaelson, who was diagnosed with Celiac disease 12 years ago. Michaelson said the goal is “to allow people that have sensitivity to have a chance to sit down with friends, [with] a beer everyone can enjoy.”
So Omission brews with barley and removes gluten during the brewing process. While standards on what counts as gluten-free are often contested, Omission brings gluten content in its beer down below 0.002%, the FDA’s threshold for gluten-free classification.  Each batch is sent to an independent laboratory for testing before being shipped across the United States."

In the photo, the yellow label is the Omission Lager, a light-bodied smooth and approachable lager whose  aromatic hop profile offers a unique, easy-drinking beer for those looking for a lighter and approachable beer style. ABV: 4.6%; IBU: 20.

In the blue label is their Pale Ale, more full bodied with hops in the nose and brewed to showcase the use of Cascade and Citra hops. Nice amber color. ABV: 5.8%; IBU:33.

The Dogfish Tweasonal Ale is a totally gluten-free sorghum based ale brewed with strawberries, buckwheat and honey. ABV: 6%. It's described by their website as:

"our first new 12-ounce 4-packs in nearly half a decade, we replaced the classic barley foundation of beer with a mild sorghum base. The hints of molasses and pit-fruit are balanced by vibrant strawberry notes and a unique complexity that comes with the addition of a malty buckwheat honey." 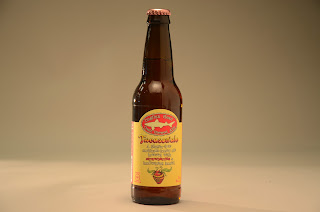 So, I'm glad to see there are alternatives out there so that I can offer dinner guests good beers and maybe dream about someday having an Imperial Porter with vanilla that everyone can share.

There is another option for folks who enjoy the occasional alcoholic beverage with friends and for us Sonoma County residents, two are local. I'm talking about hard ciders. I don't have a lot of experience with them so at this point I can't offer personal recommendations but I've been told by JT at Beercraft that these are very popular and big sellers.  With hot summer months approaching, a crisp, fruity cider with an alcohol tingle might just be the thing!.
Apple Sauced Cider is made from 100% Sonoma County organic gravenstein apples (my absolute favorite apple). Comes in 22oz bottles, ABV:6%. 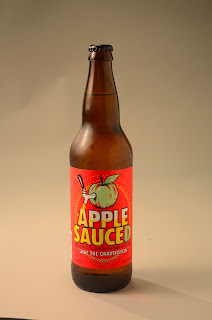 Tilted Shed Ciderworks is located in Forestville, not for from Sebastopol, a family run operation specializing in handcrafted hard ciders, using Sonoma organic fresh-pressed apples. The bottle shown here is their smoked cider which I understand was made with apples that had been smoked in a back yard smoker. Quite an original flavor. This is definitely not your Granddads' cider! ABV: 8%. 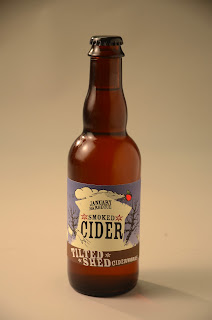 Hopefully this selection ( a small one to be sure) will help those looking to enjoy beer (and cider) again without the gluten creature hovering over their shoulder.
Posted by Marv Parker at 3:19 PM