Sucks - but not really

Although I have been enjoying Lagunitas' latest seasonal, Undercover Investigation, I still fondly remember last winter's Holiday seasonal, tastefully named "Sucks Seasonal Ale."  It was fun to stand at the bar (in the few establishments that had it, other than the Brewery) and say "give me a Sucks."
Well, the reason for the name has to do with the large expansion going on at Lagunitas as they gear up to become one of the country's largest brewers of craft beer. Due to construction, they weren't able to produce the normal winter seaonal, Brown Shugga, so the Sucks Ale became the substitute. (they even blamed themselves, saying "Lagunitas Sucks"). If you look closely at the label in the photo, you'll see that mentioned.
Anyway, by February or so, it was all gone, just a pleasant memory of an intensely flavored, full-bodied and very satisfying brew. I have forgotten what the abv was, not too high, or less than 8% I seem to recall.
What would be a favorite occupation of mine? Being the one to come up with the name for a new brew, the more outrageous, the better. 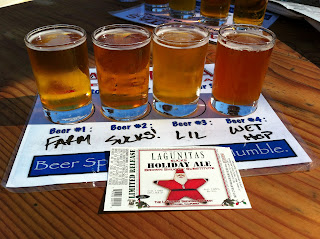